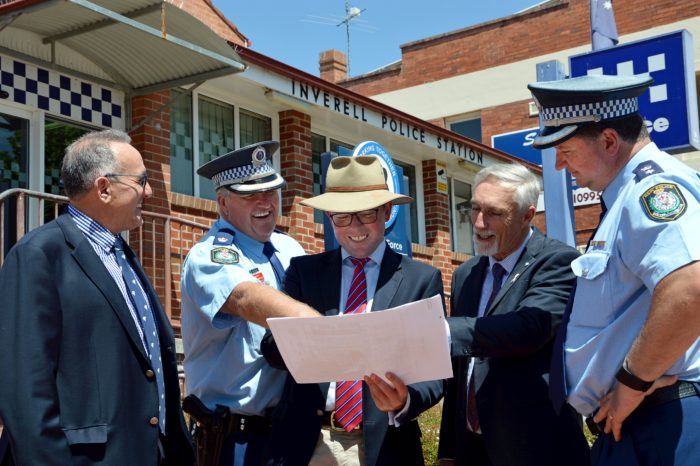 THE Inverell community is now a step closer to having its new 24-hour police station, with Northern Tablelands MP Adam Marshall today unveiling the concept designs for the historic project.

“Today is an exciting milestone in now being able to view the artist’s impression and preliminary designs for the new station, as consultation with local police continues,” Mr Marshall said.

“This is a first glimpse of what the new police station may look like –it looks good so far – and after a three year campaign to secure the funding I’m elated for Inverell that we’re seeing progress on the project.

“We want to make sure this project acknowledges the amenity of the local area but, most importantly, meets the needs of the local police and community now and into the future – which is why ongoing consultation is so important, to ensure we get it right.

“Together with Inverell Shire Council and the local community I have long campaigned for a new station for the people of Inverell, so I’m incredibly proud to see things progress to make this project a reality.”

Mr Marshall said the current station was built when Inverell had only 12 police, and that number has now grown to around 50 officers.

“Once built, this new 24-hour station will provide Inverell Police with modern facilities and the equipment they need to prevent and disrupt crime and keep the community safe,” Mr Marshall said.

“Importantly, it will be built with an eye to the future to cater for a growing local police force, as the community continues to expand.

“I’m also pushing for provision within the new station for a Police Dog Squad, as this will be an essential resource for officer across the entire New England District, based out of Inverell.

“I can assure the community that I will continue to work as hard as I can to ensure our local men and women in blue are properly equipped and resourced to continue their amazing work.”

Mr Marshall said the detailed designs would be finalised with local police over the coming months with the project expected to go out to tender in April next year.