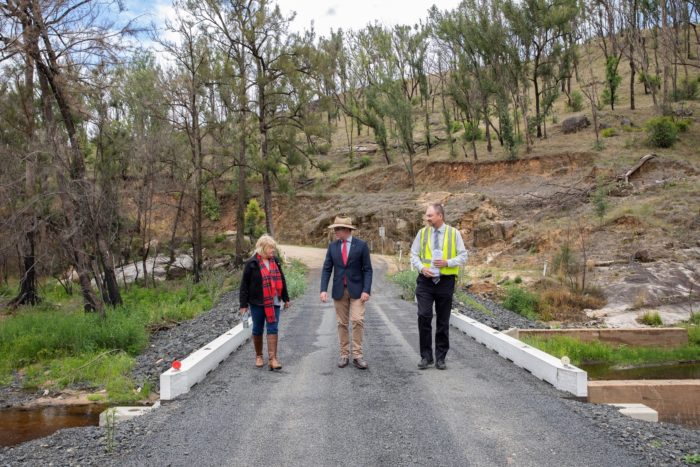 Glen Innes Severn Council Mayor Carol Sparks, left, Northern Tablelands MP Adam Marshall and Director of Infrastructure Services Keith Appleby walking across the temporary bridge at Wytaliba, which is about to be replaced by a $2.3 million concrete structure.

The previous timber bridge, which connected Wytaliba to the Old Grafton Road, was destroyed in the Kangawalla fire last November, prompting Glen Innes Severn Council to install a temporary bridge, until funds could be secured for a new permanent span.

Mr Marshall said the new bridge, funded by the State Government, would ensure the Wytaliba community was rarely ever again cut-off from the outside world.

“The destruction of the Mann River Bridge was one of the single biggest inhibitors to the Wytaliba community rebuilding and recovering from that deadly fire,” Mr Marshall said.

“Council made several attempts to install a temporary causeway to reinstate access, however a deluge of rain in the catchment following the fire saw the causeway washed away, on no less than three occasions.

“This restricted emergency supplies and support getting to residents living on the Wytaliba side of the river.

“To ensure scenarios like this are less likely in future, a new duel lane, five-span concrete bridge, 60.63 metres long and 8.4 metres wide, is being built.

“The concrete structure is designed to withstand a 1 in 50 year flood as well as future fires.

“Should there be no interruptions during construction, the bridge will be complete by February next year, with council working to have the approaches in place by March.

“This bridge will ensure emergency services can access Wytaliba during natural disasters, while residents will have added surety routes will be less impeded if they ever have to evacuate.”

“The bridge over the Mann River is a crossing for coastal access to Glen Innes that has been accessible since the 1900s,” Cr Sparks said.

“It is significantly historical and there have been many stories about the journey from Grafton to Glen Innes and was a pioneering trail, and an important supply route, from the coast to the high country.

“It is an essential piece of infrastructure for all the families living along the Old Grafton Road and for tourists to enjoy the river and the camping grounds.

“With Wytaliba Public School, located on the Glen Innes side of the river the bridge is extremely essential for maintaining children’s access to education and developmental support.

“I would like to thank the NSW Government and Adam for their support in the rebuild of the Wytaliba Bridge.”