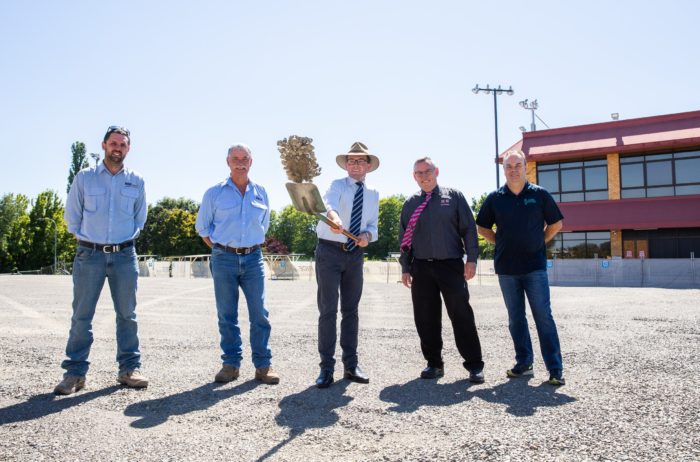 NORTHERN Tablelands MP Adam Marshall has today celebrated the start of construction of the new $7 million Armidale SerVies Motel, heralding the project as a turning point for economic confidence in the city.

Mr Marshall joined Armidale SerVies CEO Scott Sullivan and Board Vice President Mark Bullen to turn the first ceremonial sod of soil on the 32-room development, which will be built between the club and Belgrave Cinema.

“For the first time in 15 years Armidale is going to have a new motel that will deliver new jobs and new visitor opportunities to the city,” Mr Marshall said.

“Such a large level of private investment, following the drought and pandemic, shows the business community has faith in Armidale’s long-term economic recovery.

“With Armidale’s tourist visitation around sitting around 600,000 people a year it’s important we provide accommodation options that can service a variety of needs, including international guests.

“Also, with the first stage of the Armidale Regional Airport Business Park complete and planned relocation of the NSW Department of Regional NSW progressing, the demand for overnight accommodation as new operators establish themselves will be astronomical.

“I know under the current circumstances it is very easy for business operators to get down, however I honestly think the Armidale region is approaching a period of growth and we all need to be gearing up to capitalise on its arrival.

“I want to thank all Armidale’s accommodation providers for keeping their doors open, continuing to employ locals and giving travellers a reason to stop, stay and spend in our special part of the world.”

Mr Sullivan said he hoped the public saw the project as a step towards more positive economic times.

“In what can only be described as concerning times it was important for me and the board of directors to show the club’s confidence in proceeding with a multi-million-dollar project,” Mr Sullivan said.

“Despite 2021 seeing the closure of two major retailers, SerVies feels the motel project is a positive injection to the economic environment and will assist in providing further local employment opportunities.

“Once operational, I envisage up to 15 people will gain employment within the motel and the club itself.

“We are also optimistic that the new modern facility will be instrumental in enhancing tourism numbers into the region by increasing the club’s capacity to host large conventions and major events.

“With this build has come a focus on hiring locally and we are pleased Armidale-based Rice Construction will undertake the job. Should everything go to plan we expect the build to be completed by 11 January 2022.

“On behalf of the SerVies board and members, I want to thank Adam for his ongoing support of both this development and the long-term economic growth of Armidale.”

The motel will boast 28 standard rooms, one family room sleeping up to four guests and two deluxe suited for weddings and special events.