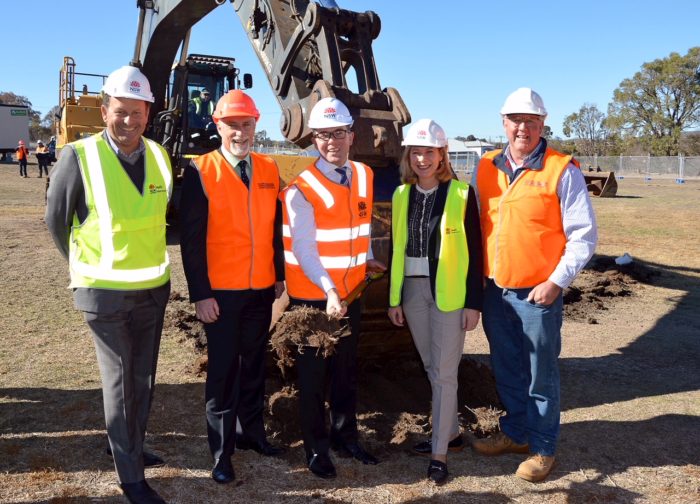 NORTHERN Tablelands MP Adam Marshall declared today a “momentous red letter day for Inverell” while turning the first sod of soil to formally commence the construction of the first $30 million stage of the $60 million and long-awaited redevelopment of Inverell District Hospital.

Mr Marshall was joined at the hospital by Inverell Shire Mayor Paul Harmon, other civic and health leaders and hospital campaigners for the ceremony on the site of the new hospital build.

The occasion was bolstered by the presence of heavy machinery that began the first of what is a large amount of rock drilling with the earthworks to be done before actual hospital construction gets underway.

“This is a momentous red letter day for Inverell,” Mr Marshall declared. “Many doubted we would ever get to this day after years and years of campaigning for this much-needed health project, but as of today, it’s official and there’s no turning back.

“Today marks the formal start of a new era of healthcare for Inverell and all credit goes to the community and their hard fought and hard won campaign.

“No local MP, no matter how good, can achieve a result like this without the strong and absolute support of council and the community and I am so proud of everyone in Inverell for doing just that. I am thrilled for the community and what we have achieved together.

Today’s event included a virtual internal fly-through of the redevelopment project, providing a visual glimpse behind the scenes of what the new building will look like.

The first stage involves the construction of a new hospital building at the rear of the existing hospital.

Richard Crookes Construction was announced as the contract builder for the first stage of the Inverell Hospital redevelopment last month and Mr Marshall said locals would have the opportunity to work during the project’s construction and local businesses the chance to tender for sub-contract work.

“Richard Crookes as a company is familiar to many in the region and has strong track record in the bush as the builders of the new Narrabri and Tamworth hospitals and the current $60 million Armidale Hospital redevelopment, as well as constructing the new $16 million Moree East Public School two years ago,” Mr Marshall said.

“The focus will be on keeping as much of the money for the new hospital local, so local tradies and businesses will have the chance to tender and quote for work from concreting, plumbing, supply of windows and fittings to painting and everything in between.

“It’s a fantastic opportunity for the entire town to be involved in the build and the government has mandated that 20 per cent of all workers on the site must be apprentices to up-skill our local young people.”

Mr Marshall again thanked and paid tribute to the unwavering strong support of the Inverell community.

“It has been a tough slog at times to get this point and more than a few times many thought we would never get to this day, so it is incredibly exciting for everyone involved and the Inverell community,” he said.

The $30 million second stage of the redevelopment, secured in the recent NSW Budget, is also being designed by NSW Health Infrastructure and Mr Marshall expects the tender to go out publicly for the works before Christmas this year.