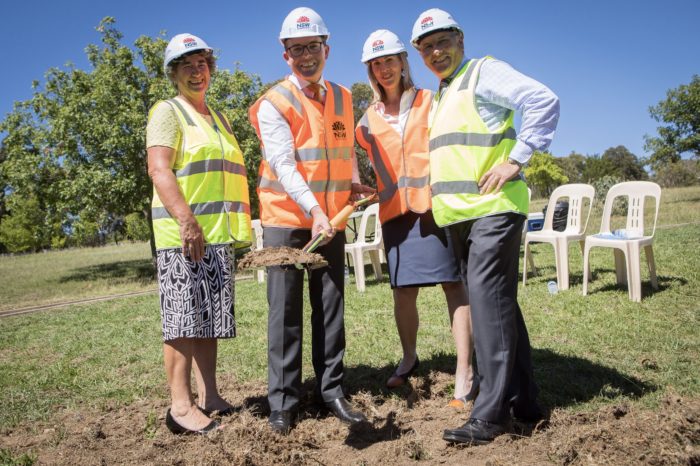 THE first sod of soil was turned today by Member for Northern Tablelands Adam Marshall to formally begin construction on the largest education project in the region’s history – the new state-of-the-art $117 million Armidale Secondary College.

Mr Marshall also released a new three-minute digital flythrough video, showing how students and staff will experience the new school when it opens on the first day of Term 1 in 2021.

“Armidale Secondary College will usher in a new era for education in Armidale and country NSW, with the school featuring innovative technology and 79 flexible learning spaces that can be adapted for different subjects,” Mr Marshall said.

The new campus, set to be built on the existing 18-hectare former Armidale High School campus, will cater for up to 1,500 students and deliver new school buildings with 79 new air-conditioned classrooms equipped with the latest technology, specialised spaces for industrial arts, hospitality and agricultural studies and improved performing arts and sports facilities.

Armidale Secondary College will also be home to a state-of-the-art ‘smart farm’ allowing students to learn from the latest agricultural technologies and methods in a purpose-designed indoor and outdoor learning area.

Richard Crookes Constructions won the contract to undertake the project. The company is currently undertaking the $60 million redevelopment of Inverell Hospital and has previously completed the $16 million Moree East Public School, as well as the redevelopment of Armidale Hospital.

Mr Marshall said there would be around 400 jobs created over the course of the two-year construction period, with the vast majority based in Armidale.

“I want to ensure as much of the $117 million for the new school stays in the local economy and to that end, I am pleased that 20 per cent of the project workforce will also be apprentices and many local contractors will get work on this project,” Mr Marshall said.

“The economic impact of the construction phase will be enormous and keep many local businesses going through what has been a very tough 18 months with drought.”

“The existing heritage building on the campus will be the preserved and enhanced to be the centrepiece of the new school, maintaining a tangible link to the past and The Den will be retained, expanded and upgraded to a first-class three-court indoor facility.”

Minister for Education Rob Stokes said the NSW Government was building on the state’s world-class education system so students are ready for the jobs of the future.

“This project will deliver the students of Armidale the top-quality education resources they need to succeed,” Mr Stokes said.

Information booths will also be set up from Term 1 next year, where the project team will be available to discuss the project and answer questions.

This project is being delivered as part of the NSW Government’s record $6 billion school building program over the next four years, which is delivering more than 170 new and upgraded schools to support communities throughout NSW. This is the largest investment into public school infrastructure by any state government in Australian history.