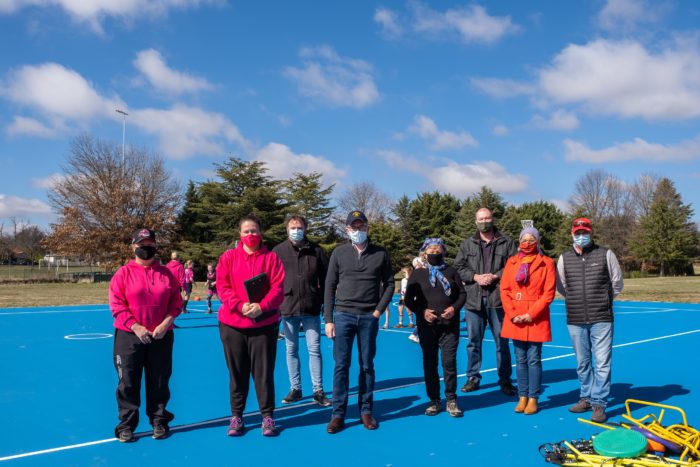 THE contractors are on site, the whistle has blown and work has started on Glen Innes Regional Netball Facility, with Northern Tablelands MP Adam Marshall joining Glen Innes Severn Council representatives over last weekend to cheer on the $5.5 million development.

The State Government has contributed $4.22 million to the project, with the Federal Government funding $1.2 million.

Mr Marshall said the development would make Glen Innes a centre of excellence for netball in the northern NSW.

“Designs for the building include a 2,125 square metre two-court indoor stadium. The courts will have sprung floors, line marked for netball, basketball, futsal, badminton and volleyball.

“The spectator experience is also being catered for with bench seating running the length of one wall. Player and referee change rooms, canteen and toilets will round out the stadiums internal fit-out.

“By December council is hoping the build is close to lock up stage. If everything goes to plan construction is expected to be finished by February 2022.

“The new complex will help to cater for increased participation in netball, and support development of representative players.”

“The growth of netball in Glen Innes has been stifled in the past, with its three outdoor asphalt courts and four grass courts that don’t meet representational standards or specifications for all-weather play,” Cr Sparks said.

“Additionally, it would be great to see two more outdoor courts installed adjacent to the building. Council will be looking at future funding opportunities to achieve that outcome.

“Glen Innes has a long history of promoting women’s sport and from next year we will see that taken further as we become a netball centre for excellence.”