CONTAINER DEPOSIT TO HAVE CLEAN START IN ARMIDALE AND GUYRA 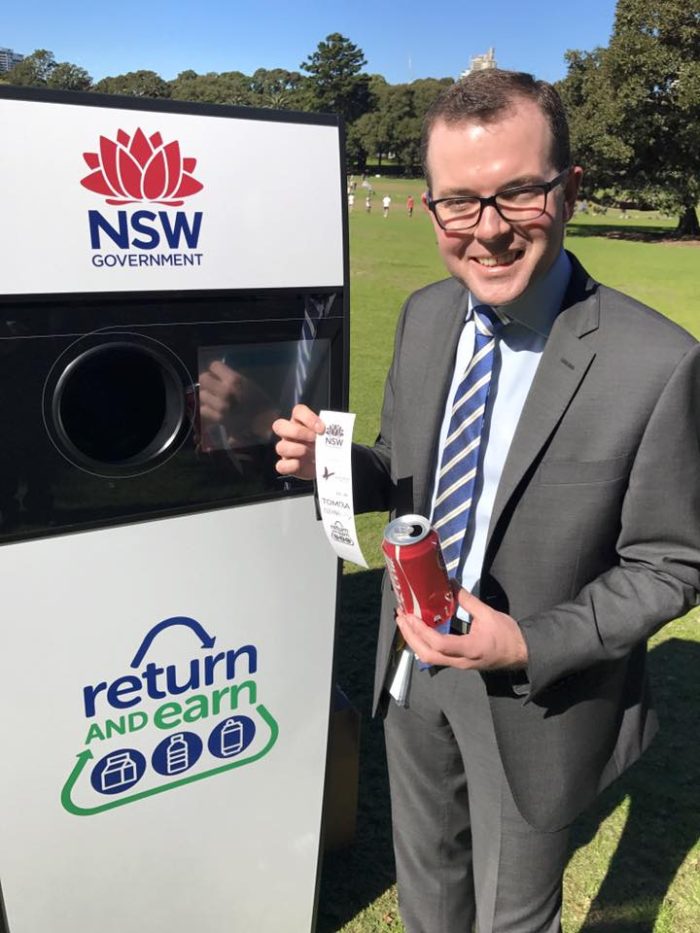 Member for Northern Tablelands Adam Marshall tests out a container deposit at a Reverse Vending Machine.

FACILITIES to allow locals to recycle their used cans and containers and claim their 10 cent refund will be available soon in Armidale and Guyra, Member for Northern Tablelands Adam Marshall announced today.

Since the introduction of the NSW Government’s Return and Earn scheme on 1 December, Mr Marshall has been working with the government and Armidale Regional Council to secure collection points for the Armidale and Guyra communities.

“Both communities will have a RVM installed by the end of the year, allowing locals and charity groups to make the most of the new Return and Earn scheme,” Mr Marshall said.

“These machines will allow users to easily redeem up to 500 containers at once, claiming their 10 cent deposit with each one – as a voucher, donation or placed in their PayPal account.”

Mr Marshall said that he had long supported the container deposit scheme, but was “frustrated and disappointed” by the patchwork and slow rollout across the region.

“I share the community’s frustrations that these collection points have taken so long to be ready. They should have been set up and switched on before the scheme began on 1 December, but they weren’t and that’s not good enough in my view,” Mr Marshall said.

“Unfortunately, discussions between the scheme operator and stakeholders have taken longer than they should have, leaving locals with no way to redeem their collected deposits.

“I urge those interested in the scheme to hold onto their containers, as a solution and your local collection point is just days away.”

Mr Marshall said these return facilities will be the first of many in the region.

“When these RVMs are set up and returning money to the community, I will expect that more convenient setups are established in the centre of town,” Mr Marshall said.

“This scheme will help our towns and roads clean, reduce waste going to landfill, and provide a handy source of fundraising for community groups. When we’re through these teething pains, this will put our state at the front of the pack for green consumption.”

Reverse Vending Machines have already been installed in Moree, Inverell, and Glen Innes. Bingara locals can access a refund over the counter at IGA. Guidelines dictate that containers should be empty, uncrushed, unbroken and have their original barcode attached.

“I have been assured by the Minister responsible for the scheme and her office that my request will be granted,” he said.

“I have been promised that all those communities across the Northern Tablelands will have collection points by the end of February next year, some even sooner.”

Mr Marshall will continue to keep the electorate and communities up to date with the rollout of the Return and Earn collection points.