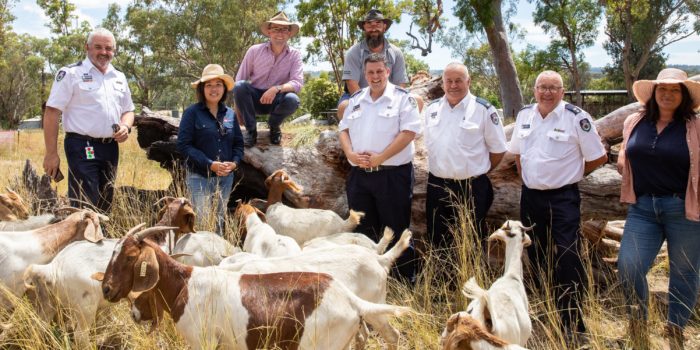 Mr Marshall said the 50 strong herd had been hired as a result of a recommendation of the Independent Bushfire Inquiry into the Black Summer bushfires of 2019/20.

“As the smoke cleared after the Black Summer bushfires it was clear to everyone a new approach to fire mitigation was required in NSW,” Mr Marshall said.

“As a result NSW RFS has been trialling herds of goats as a way of knocking-down heavy vegetation in areas that are difficult to clear through traditional hazard reduction techniques.

“The supervised goats, which are from Tamworth, have moved into Coolatai where they are strip grazing a 2.3 hectare block of Crown Land on the western edge of the village.

“The area has been divided into 7 blocks which the herd will graze for approximately 6 to 8 weeks.

“These kids are definitely not working on an empty stomach with estimates they will chew through approximately a quarter of a hectare of dense vegetation in two weeks, and medium density vegetation in one week.

“If you think about the rugged terrain of our region this novel solution for managing vegetation is just the thing for protecting people’s lives and property, and the best thing is it can be implemented rain, hail or shine 365 days a year.”

While in the area the RFS hopes to slash on an asset protection zone on an area of about 2.2 hectares behind a residence on the western side of the village.

The NSW Government has committed almost half-a-billion dollars in response to the Inquiry, which includes almost $38 million for additional mitigation crews to deliver greater hazard reduction, with a total of 176,499 hectares treated in 2020-2021.