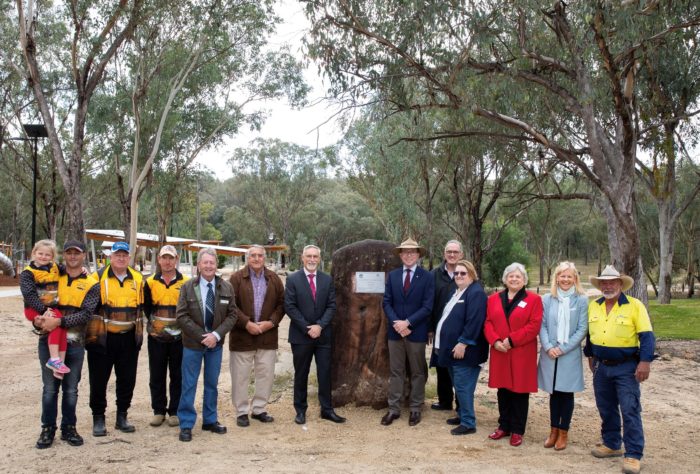 TOURISM in the Inverell Shire has set sail on a course to growth and prosperity, with Northern Tablelands MP Adam Marshall and Mayor Paul Harmon this week officially opening the $5.7 million redevelopment of Northern Foreshore Copeton Dam tourist-park.

In 2019, Mr Marshall announced a $5 million grant had been hooked from the State Government, to combine with Inverell Shire Council’s $700,000 contribution, to modernise facilities at one of the region’s most popular visitor destinations.

“Today the spillway of potential has opened and the true economic benefit of Copeton Dam is ready to flood businesses in the Inverell district,” Mr Marshall said.

“Not since the dam was built in the late 1960s has there been this level of significant investment in facilities at Copeton Dam.

“From the moment visitors drive through the impressive stone entryway, along the new sealed road and past caretaker Tom Stapleton’s new office and residence they are made to feel welcome.

“The campground has doubled in size with improvements made to cater for over-night visitation of all ages and levels of mobility.

“The new accessible amenities and shower block is connected to camp sites by a 2.4 kilometre network of footpaths.

“With the family in mind an improved barbecue area has been installed along with fitness equipment, children’s playgrounds and all-important splash park.

“It is only fitting that the region’s biggest tourist attraction should have the southern hemisphere’s largest boat-ramp, with the 440-metre long concrete roadway able to cater for all vessel sizes and provide access to the water’s edge no matter the level.

“Visitors now have the opportunity to appreciate the true majesty of this 1,364,000 megalitre storage, with a number of new viewing platforms offering expansive views from up high.

“If there is one showpiece to be singled out it is the new timber communal hall, which also offers uninterrupted views of the dam.

“With floor to ceiling glass windows offering panoramic views of the dam, the facility has transitioned from just a campground to a premier function and events venue.

“Of the many major projects that have been delivered in the Inverell Shire over the past five years, I feel it is this redevelopment which will provide the most enjoyment and long-term economic prosperity for the area.”

Cr Harmon said along with its trophy Murray Cod, the completed Copeton Dam Northern Foreshore would secure Inverell as a powerhouse for tourism in northern NSW.

“In the six months since camping resumed at the park bookings have increased steadily, with the powered sites regularly booked out,” Cr Harmon said.

“While Inverell welcomes the additional $4 million that will flow into local businesses each year from increased visitation, the financial benefit of through-traffic will also be felt in surrounding communities like Bundarra, Bingara and Warialda.

“Our region has been crying out for more holiday destinations which are close to home, affordable for families and accessible to people of all abilities.

“The Northern Foreshore Upgrade aims to do just that by widening the demographic of visitors who can access the iconic facility.

“Alongside the Inverell RSM Fishing Club, I want to acknowledge all the boaties, fishos, campers and community groups whose input to the design of this project has led to the incredible facility which sits above the dam today.”

Mr Marshall said prior to its completion the redevelopment was already playing an important role supporting the economy.

“When I announced this funding in October 2019 the drought was at its peak and the COVID-19 pandemic was only months away from closing borders and devastating local businesses,” he said.

“This project has been a lifeline for Inverell’s construction industry over the past 18 months, with between 50 and 55 people each day working on the different elements, from more than 30 different companies.

“I congratulate Mayor Paul Harmon, council staff and caretaker Tom for their vision in delivering this development on time and on budget.”