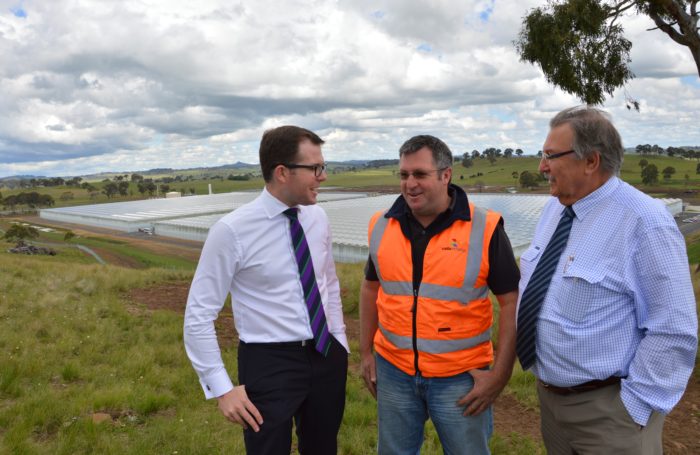 Mr Marshall said the support from the government had enabled the Costa Group to upgrade and expand their facilities, which has created more jobs for Guyra and the region.

“Costa has completed the construction of two new glasshouses to the north of Guyra, totalling 10 hectares, that will help the company to achieve its long-term goal of producing 21 million kilograms of tomatoes a year,” Mr Marshall said.

“The new glasshouses, which are already producing tomatoes, expand Costa’s existing 20 hectare glasshouse on a nearby site.

“Costa is planning to invest up to $60 million in this expansion and create 171 new jobs, which is great news for Guyra and surrounding centres.

“Costa employs up to 6,000 people during the peak harvest season across Australia with more than 2,000 people in NSW alone through its tomato and berry growing operations – around 400 of which are now in Guyra.”

Costa is a major Australian grower, packer and marketer of fresh fruit and vegetables and a vital business in the local community and Mr Marshall said he was pleased to that the government partnered with Costa to help create more economic activity in the region and more jobs.

“This investment has helped Costa upgrade the road entrance from the New England Highway to the site of the new glasshouses, allowing easier and safer access,” Mr Marshall said.

As well as tomatoes, Costa produces berries, mushrooms, citrus, bananas and table grapes, as well as being a leading marketer of avocados. Costa supplies Australian supermarket chains and independent growers and exports to Asia, North America and Europe.