COUNTDOWN TO OPENING OF NEW EMU CROSSING BRIDGE AT BUNDARRA 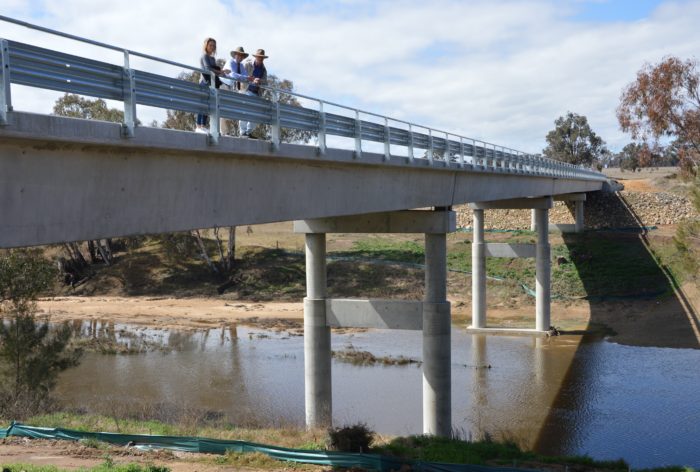 THE days of traffic alerts and ‘Road closed due to flooding’ signs at Bundarra’s Emu Crossing Bridge are numbered, with the expected opening date of the new $4 million bridge only weeks away, according to Member for Northern Tablelands Adam Marshall.

“All credit to Uralla Shire Council and staff for their management of this project – it’s not only expected to be completed on time but also on budget,” Mr Marshall said.

“Construction of the new bridge by Newcastle-based contractors Civilbuild was finished in June, allowing Uralla Shire Council road construction crew to move in to work on the 1.6 kilometres of road approaches, which will re-align a section of Thunderbolts Way.

“There have been a few weather delays due to some good rain but apart from that it has been a smooth operation. The community has waited more than 70 years for this so it’s a very exciting time for locals as well as the entire region.”

“It’s been a big project but everything has gone smoothly,” Mr Bell said.

“We’ve used about 36,000 cubic metres of excavated material for the new site and 6,000 cubic metres is being used to lay the road pavement base. We’re about half way through that process now and that should take about four weeks to finish.

“Weather permitting, we will have the bitumen laid in a day and then move onto the erection of safety barriers, so hopefully we will be ready to open the bridge at the end of October.”

Mr Marshall said once the Emu Crossing Bridge project was completed, attention would turn to the next project, the construction of a new Abington Creek bridge.

“Anyone who travels this route would be well aware of the safety concerns when approaching Abington Creek so this is a very welcome build and I’m pleased to see Uralla Council has already begun work on clearing a path for the new bridge,” he said.

“Civilbuild will once again be engaged to construct the bridge and Uralla Council will complete the approach work. This is a jointly funded project with the Federal and State Governments each contributing $705,000 and the council $43,000.

“Thunderbolts Way is the only direct transport route between the towns of Bundarra, Bingara, Warialda and Inverell in the west, connecting them to Armidale and beyond so the upgrade of these two creek crossing has been essential and long overdue.”