CRACKING DOWN ON CACTUS IN THE NORTH OF INVERELL SHIRE 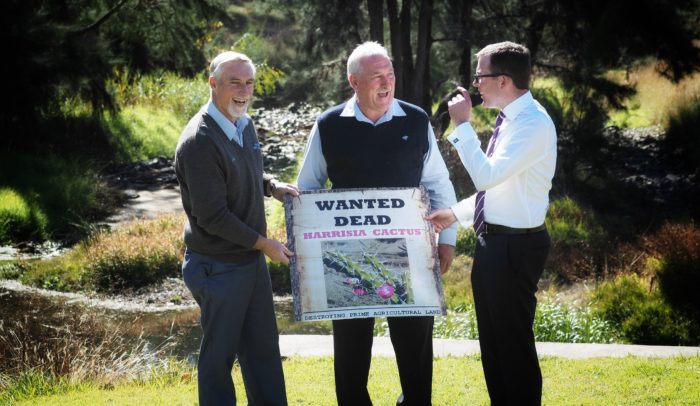 INVERELL Shire Council’s ongoing battle with the invasive Harrisia cactus has just got a $69,517 funding boost from the NSW Government.

Announcing the NSW Environmental Trust grant this week, Northern Tablelands MP Adam Marshall said such funding was vital if the local environment is to remain productive and biodiverse.

“About 15 per cent of the plants that grow in Australia are introduced,” Mr Marshall said.

“Many of them are continuing to claim new territory at the expense of native species. Doing nothing is not an option: we must continue to fight weed invasion wherever we can.

“Inverell Shire Council and the landholders it collaborates with are doing a terrific job in controlling a weed that renders the land it occupies pretty much useless for any other purpose.

“I’m delighted to be able announce these extra funds to support that work.”

Inverell Shire Council will use the grant to improve the integrity of several Endangered Ecological Communities (EECs) by tackling cactus spread within them.

All up, 32 of the shire’s holdings will benefit from Harrisia cactus control.

The work will be supported with 50 per cent contributions from landholders, and be used to raise awareness of the weed problem in the community.