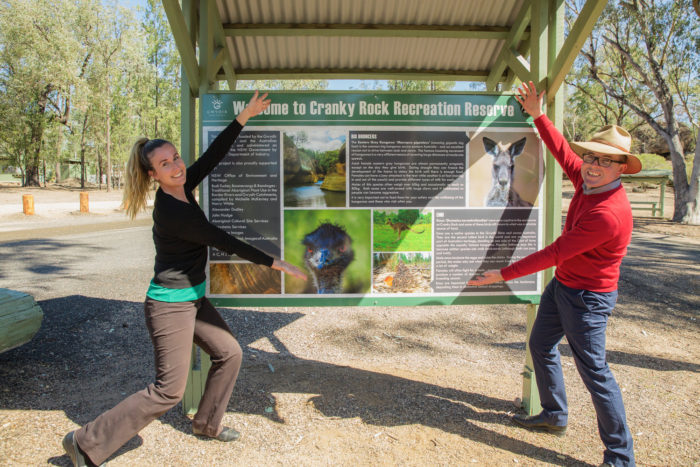 NORTHERN Tablelands MP and Minister for Tourism Adam Marshall has praised a graphic upgrade to one of the hidden tourist hot spots at Warialda which has seen a brush up to the historic cultural heritage of Cranky Rock.

Mr Marshall says a $20,000 grant from the State Government has given the Aboriginal Dreamtime tourist spot a modern makeover that tells more about its indigenous story.

Gwydir Shire Council, which manages the public reserve, has kicked in a similar amount to complete work at the Cranky Rock site on Reedy Creek, just east of Warialda, off the Gwydir Highway.

The centrepiece of the new look for the tourist attraction is the installation of 28 specially-designed perspex information signs or stations at the reserve.

“It’s a special place for the local Kamilaroi and Gamilaroi tribes and has an important place in the story of local indigenous people, so what’s been achieved at Cranky Rock is pretty special,” Mr Marshall said.

“The Dreamtime stories we know from elders and aboriginal historians tell us that it was a meeting place for neighbouring tribes to come together once a year, where marriages were performed, where arguments were settled and where things like emu picking could go on.”

Cranky Rock reserve features a conglomeration or jumble of granite boulders, stacked almost haphazardly on top of each other like balancing rocks; a geological masterpiece of tors that are said to be some 245million years old.

They’re arranged around a big deep watering hole fed by natural springs which dominates that part of Reedy Creek, which flows in, out and around it.

Nikki Rose from the Warialda Tourist Office has been the designer and graphic artist for the information signs and has relied heavily on local indigenous lore and expert opinion to complete the tourist info panels.

“It is the main attraction for tourists at Warialda and is a hidden gem,” Ms Rose said.

“It is a beautiful spot.”

Mr Marshall said Cranky Rock was a tourist magnet and increasingly a popular place for the grey nomad sector of the tourist industry.

“It is now part of an indigenous cultural tourist trail, with the Myall Creek massacre memorial site so close to it, and the other tourist drawcards like the stretch of the Gwydir River at Bingara,” Mr Marshall said.

“The funding came through a regional tourism program for projects designed to drive demand, improve quality and increase tourism expenditure – and this Cranky Rock Dreamtime Wonder project meets all that criteria.

“It will add another dimension to the stories of the Dreamtime; it’s a unique place to discover and explore and Cranky Rock is of national significance because of the indigenous story it conveys.”

Although its Aboriginal name isn’t known, the first white settlers named it Cranky Rock about 145 years ago and where once it was on private property it was resumed by the former Yallaroi council for a reserve years ago.

White legend and local newspaper reports have it that around 1875 there was a cranky Chinaman, Charlie the Chinaman Young, a local cook who became enraged with a white woman, Mrs Golthorpe.

She had quarrelled with him after warning her son not to play cards with Charlie. He stabbed her with a butcher’s knife, took off and evaded a police search until he was found and cornered at the spot at Reedy Creek, where he jumped to his death from one of the highest boulders.