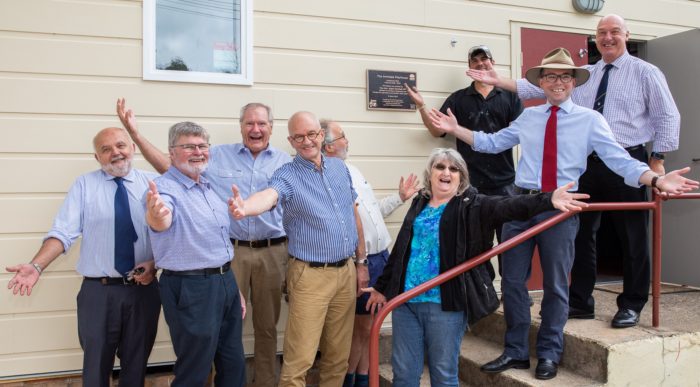 FOR the first time in almost 16 years the curtains have been raised at Armidale’s Playhouse Theatre, with Northern Tablelands MP Adam Marshall joining representatives from the Armidale Playhouse Working Group to unveil a plaque to officially open the redeveloped building yesterday.

Since 2018, the State Government has provided more than $520,000 in funding to redevelop the building, which was forced to close due to deteriorating conditions.

Mr Marshall said the theatre’s reopening marked the end of an eight-year effort to restore the former school house and artistic space.

“The resurrection of the Playhouse Theatre is a momentous occasion for the Armidale Dramatic and Musical Society, giving the city’s amateur thespians their own 101 seat venue for intimate theatre and music performances,” Mr Marshall said.

“It’s now a spectacular facility, adding another much-needed string to Armidale’s cultural bow, and I’m sure will see a great deal of use over the coming years.

“Climate control, portable staging, audio-visual equipment and stage lighting have also been included in the refurbishment.

“A new fence around the entire perimeter and additional disabled access has improved the building’s external façade, which faces the very busy Beardy Street.

“Over the weekend the society staged its first performance in the Playhouse, with reports the tiered seating gave the audience perfect sightlines of the stage, while the spacious greenroom allowed for smooth preparation for the cast.

“The Armidale Playhouse Theatre has been an important character in the history of Armidale and I’m pleased, through this contribution from the State Government, it will once again play a leading role in the city’s future.”

“As the principal tenant and caretaker, ADMS now has a permanent home in which to stage its smaller productions, rehearse, train up-and-coming talent and produce shows at a time that suits our calendar and not someone else’s,” Mr Horton said.

“The benefits to the community are enormous, we can now provide a wide range of productions of all shapes and sizes as well as provide a performance space for the town’s enormous array of musical talent.

“Already we are experiencing huge interest in this venue from all of the different arts disciplines. Armidale can only benefit with this broadening of the arts culture and provision of a venue in which people can display their talent.

“We have been and are extremely grateful for the various NSW Government grants received and the wide variety of organisations and people who have donated to make this renovation a reality.

“We look forward to moving our vision for this venue even further forward in the near future as funding allows, to make it one of the premier small venues within North West NSW.”