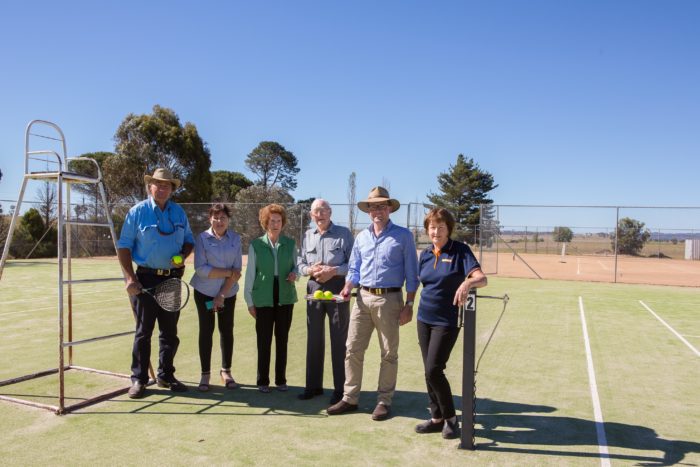 Club Secretary Matthew Grant said the funding hit was a giant boost for a club that played every week.

“We are ecstatic with the news that we were successful in getting this grant and we’ve very thankful for Adam for his support and the lobbying to secure it,” Mr Grant said.

“We’re over the moon; it will make a massive difference to our club facilities.”

“It will give the club the opportunity to expand the opportunities in tournament play, in night competition and in giving more players more time on the courts,” Mr Marshall said.

Mr Grant said the two old back clay courts were high maintenance, needing hours of preparation before players could take to them.

“If you get rain, and we haven’t had much of that, but when you do, they get boggy very quickly, and they can be unplayable for long periods,” he said.

“But by replacing them with synthetic grass surfaces, it means only half an hour or an hour before you can get back onto them, so that’s a huge bonus for us.

“The lighting we have now, and it’s only on the two front courts, isn’t that good, but the new lighting will be decent and you’ll actually be able to see the ball, and on all four courts.

“We have raised money over the years for the club but the sort of funding you need these days is just not possible especially for a small club like ours, but this government funding is just the thing.”

Mr Marshall said the tennis club pre-dated World War II and its present patrons, Vince and Della Elliott, had served in the president and secretary roles for something like 40 years over that time.

“It’s a great club with up to 60 members and about 40 or 50 players who play every Saturday in seasonal comps,” Mr Marshall said.

“And their twilight competition will be able to be expanded to night play with the new lighting over all four courts, as well giving them more opportunities to attract more regional players and tournaments.”

Mr Grant said funding provided by one of the members, to erect a practice wall between the front and back courts will hopefully also attract some younger players to come along and learn or just have a hit.

“Deepwater Tennis is a big winner with that $138,000 but I’m proud and pretty pleased to be able to say that Deepwater has scored three government funding programs in the past couple of months – and that’s a total of over $171,000 coming into the village for sporting facilities,” Mr Marshall said.