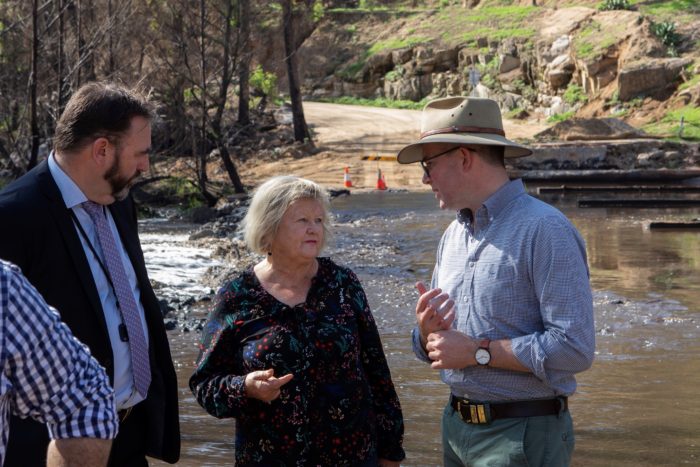 NORTHERN Tablelands MP Adam Marshall has today announced personnel from the Australian Defence Force (ADF) will assist Glenn Innes Severn Council with the construction and maintenance of a river crossing at Wytaliba, maintaining permanent access to the fire-affected community.

During the Kangawalla fire in early November last year the timber-based bridge over the Mann River into Wytaliba was destroyed, prompting council to install a temporary side access.

Mr Marshall said that consistent heavy rainfall at the top of the catchment had washed out that crossing on four occasions, making it impassable for residents.

“As a temporary solution, until a new permanent bridge is built the ADF, using its specialized skills, has been working with Council to bolster and strengthen the existing river crossing in the hope of reducing the impact flood water has on the road.

“Part of that process will see a solid pad established alongside the Mann River where a crane can be stationed to aid with movement of rocks and the strengthening of the embankment.

“Unfortunately the scale of devastation to public property caused by these fires is far beyond the capabilities of what local government is able to clean up and respond to. I thank the ADF for providing its specialised skills to ease this particular burden on Glen Innes Severn Council.”

Mr Marshall said council was also working with the ADF to help with the cleanup and removal of fire damaged buildings.

“Before the rebuilding of homes can start all the sites need to be fully cleaned up and remediated,” he said.

“Currently the ADF has around 100 personnel supporting the fire recovery effort in the Glen Innes area and Council is currently negotiating to see of some of those are able to dig in and help with the removal of hazardous materials like asbestos and fire damaged building materials.

“I want to thank Council, the ADF and the community for working together and I’m hopeful it won’t be long before we start to see new homes starting to take shape once again at Wytaliba.”