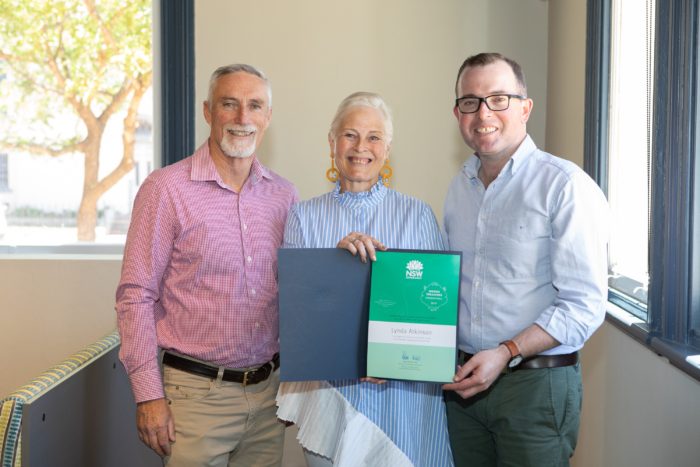 This year’s Honour Roll recognises 78 NSW women for their valuable volunteer roles and was unveiled by Mr Marshall at the recent Walcha Rural Women’s Gathering.

Mr Marshall said Lynda has been a pillar of strength in her community during the drought.

“Lynda describes herself as ‘flawsome’ (awesome with flaws) but I can guarantee the contribution Lynda has made to improve the lives of people in Delungra and Inverell over the years is anything but flawed,” Mr Marshall said.

“A mother of eight and grandmother of 14, Lynda’s experiences in finance, real estate and counselling has paved the way for her involvement in a variety of different community organisations including Inverell Life Foundation and its Rural Outreach Centre and the Rural Financial Assistance Scheme.

“During this terrible drought Lynda has helped her friends and neighbours through her membership of the Delungra District Development Committee’s Rural Support Network Service, distributing donations and providing emotional support to those doing it tough.

“These are only a few examples of Lynda’s efforts and she should be extremely proud of their nomination and in joining this roll of highly-regarded rural women.”

Mr Marshall said all nominees have had their names put forward by locals in the community who recognise their value.

“This year’s nominees join a growing list of over 1,000 volunteers who have been recognised since the first Honour Roll was launched in 2010,” he said.

“This small gesture of appreciation is a tribute to these rural women as we continue to focus on building resilience and a rewarding future for the next generation beyond the current drought.

“Volunteering has been shown to not only boost the local community, but also to provide opportunities for people to connect and to gain personal and practical benefits and I thank Lynda for her continued contribution.”