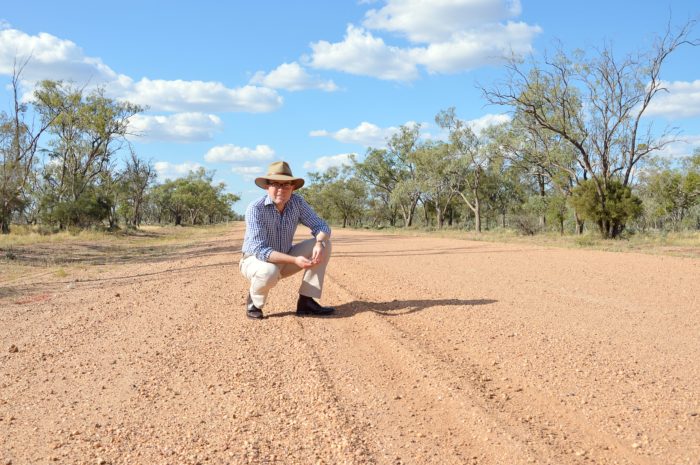 Northern Tablelands MP Adam Marshall on Carrigan Road (Main Road 507) which has received $3.5 million to seal the first 13 of 56 kilometres of gravel between Mungindi and Boomi.

Mr Marshall said the 56-kilometre road, otherwise known as Main Road 507, was a significant freight route for local producers and the ongoing costs associated with it being unsealed will no longer be a headache for locals and Moree Plains Shire Council.

He said more than $30 million of agricultural produce, on average, was transported off properties along Carrigan Road and out to market.

“I’m thrilled this money has been announced as part of the NSW Budget,” Mr Marshall said. “It is absolutely critical to the productivity of Moree and the Mungindi area.

“Local farmers and Moree Plains Shire Council have been pushing for the sealing of this road for close to 25 years.

“This is great news and represented the first down pavement on stage one of four to completely seal the entire length, estimated at around $14 million.

“This route isn’t just an outback track, it now supports tens of thousands of freight movements each year but is gravel and is out of action every time it rains.

“One business alone on this road can account for almost 2,000 truck movements annually. Another lost count at 500, so this road is crucial and seeing it sealed has been a goal of both mine and Moree Plains Shire Council.

“Sealing the road makes guarantees all-weather access for farmers, school buses and emergency services. It will also save millions of dollars each year in transport costs for producers.”

Earlier this month, Mr Marshall took Roads Minister Melinda Pavey along Carrigan Road to meet with locals and see the state of the road personally.

“I’m delighted that together with Moree Plains Shire Council and the local community, our advocacy has got the first stage of this project across the line,” Mr Marshall said.

“Now we have the money to get started and can provide the safe and effective road infrastructure that locals have desperately needed for years.”

The NSW Government funds will supplement funding from Moree Plains Shire Council and contributions from local producers to see work start on the first 13-kilometre section of road to be sealed.

Mr Marshall paid tribute to council, especially Mayor Katrina Humphries and Councillor Sue Price, for its advocacy and support to secure the funding.

“This is just the beginning as far as we’re concerned and our efforts will be re-doubled to ensure the next three stages are locked in over the next 12 months,” he said.