DO NOT DRINK ALERT ISSUED FOR URALLA TOWN WATER SUPPLY 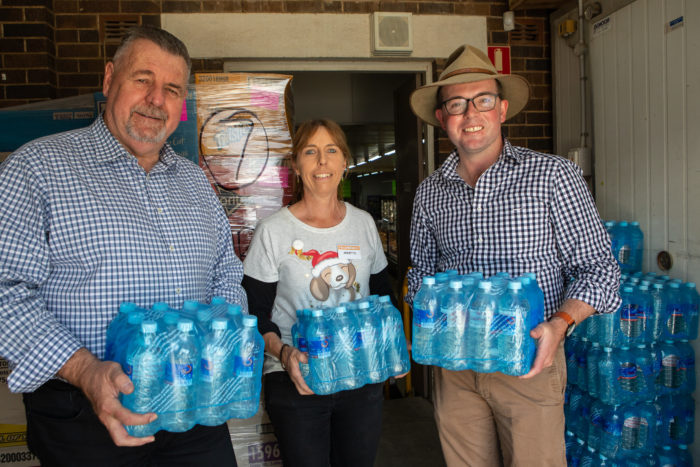 Uralla Shire Mayor Mick Pearce, left, Uralla Foodworks Manager Annette Ryan and Northern Tablelands MP Adam Marshall with some of the bottled water which has been delivered to town for local residents today.

URALLA residents will have access to bottled drinking water free of charge until arsenic levels in the town’s water supply are returned to acceptable levels, within the Australian standards, Northern Tablelands MP Adam Marshall said today.

Under the Australian Drinking Water Guidelines, potable water supplies should only contain up to 0.01 milligrams or arsenic per litre, however a routine test of Uralla’s drinking water recorded a reading of 0.04 to 0.05 milligrams per litre.

Mr Marshall was in Uralla this morning with Mayor Mick Pearce and Acting General Manager David Aber to announce the State Government and Uralla Shire Council were taking immediate action with precautionary measures to protect local residents’ health, including a ‘do not drink’ alert for the town water supply.

“Adverse health effects are very unlikely at the concentration present in Uralla’s drinking water but locals are still being advised not to drink or cook with town water at the moment as a precaution,” Mr Marshall said.

“Everyone can be assured that the town water is still safe to use for hand washing, showering, bathing, washing clothes and in the garden, it can even be consumed by pets.

“Until water quality is restored, 40,000 litres of bottled water will be trucked into Uralla each day and distributed from Foodworks and Pursehouse Rural to locals residents for free.

“Boiling the town water will not make it safe to drink and bottled water should be used for drinking, food preparation, making ice, cleaning teeth and gargling.

“The best case scenario is things will be back to normal in a couple of days but residents do need to be prepared that efforts to reduce the arsenic levels could take some weeks, as a worst case scenario,” Mr Marshall said.

Mr Marshall said since the elevated arsenic level was detected and confirmed last night, council had worked quickly with State Government agencies to look at ways to address the issue.

“Council is working closely with the Department of Planning, Industry and Environment – Water and NSW Health to optimise the current water treatment plant processes to remove arsenic from the water supply and reduce its concentration the national standards,” he said.

“It is thought that the dwindling water levels in the Kentucky Dam (Uralla’s water supply) has caused a spike in the concentration of arsenic in the supply.

“Arsenic can easily be removed by additional treatment processes at the plant and specialist engineers will arrive in Uralla shortly to work with council staff to improve the current treatment process.

“I fully support the steps Uralla Council has taken to alert authorities and the community and I urge the community to co-operate and with council directions during this period.

“I want to assure the community that every possible support from the State Government is being provided to council, including the bottled water and freight costs, at no charge to the community or council.

“Hopefully, this will all be resolved very soon but people’s health is paramount, hence the precautionary approach taken by council and the authorities.”