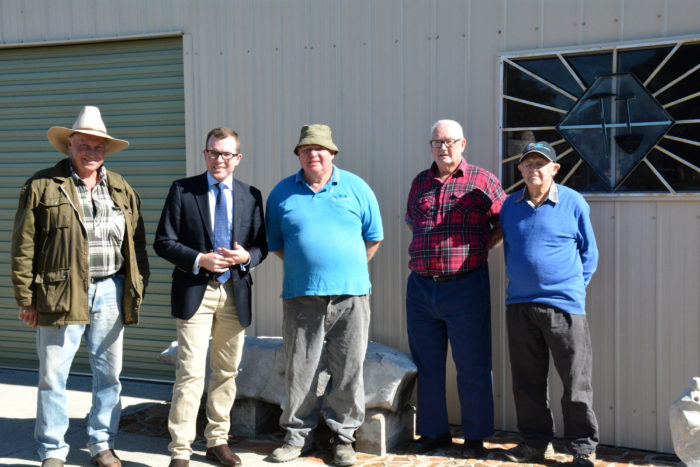 INVERELL’S world famous sapphires will soon be looking sharper than ever, with the Inverell Lapidary Club the proud new owner of 13 gem-faceting machines thanks to a donation from TAFE NSW.

The machines, used for cutting and shaping gems and minerals, were originally used to teach gem cutting at the Inverell TAFE campus, but are no longer required.

Member for Northern Tablelands Adam Marshall organised the handover, describing the donation as a win for the town’s tourism potential and fossicking culture.

“Considering Inverell TAFE no longer need the machines, it’s crystal clear that the Lapidary Club are much better stewards for the 13 machines rather than being stored away sitting idle,” Mr Marshall said.

“These machines allow experienced users to grind down gemstones from their raw form, turning them into a brilliant and beautiful display piece.

“Inverell’s earned the title ‘Sapphire City’ thanks to its rich history as one of the most productive town’s in the state’s mining belt and this will allow the region’s geological history to be put on display more professionally than ever before.

“While interest in pursuing gem cutting as a profession has waned in recent years, Inverell’s hobby lapidarists are growing in strength – with regular events teaching locals and tourists how to find, cut, and display rare minerals and gemstones.

“Over 5,000 people come through each year hoping to strike it lucky, or just to learn more about one of the Northern Tablelands most historically lucrative industries.

“These machines will make it easier than ever to build upon that international interest, as well as further upskill the club’s growing membership.”

“We’ve got a lot of interest internationally because of being known as the Sapphire City – we’ve got people travelling through all the time to go fossicking,” Mr Provis said.

Currently, the club has around 50 members – a number that swells with casual members during peak season. The multi-faceted club will be picking up the new machines shortly, and is planning to expand offerings to help out newbies.

“We’ll be able to run courses now – members who haven’t been able to buy a faceting machine will be able to use them to improve their skills,” Mr Provis said.

“They’re very dear to buy outright – we’ve got a couple of homemade ones, but they’ll never be good enough to train people on.”

The 13 machines will be added to the club’s newly expanded clubhouse – which will be finished by late September thanks to an $18,970 grant from the NSW Government.