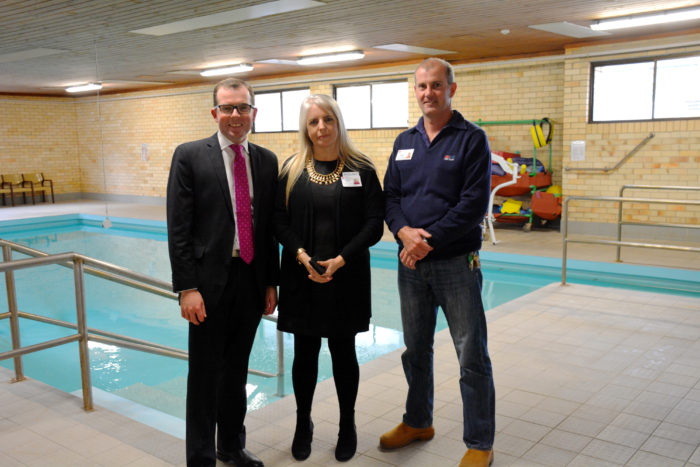 WATER quality issues have been resolved, a roof replaced and extensive testing completed – now Armidale’s Hydrotherapy pool is ready to welcome the public once more.
Member for Northern Tablelands Adam Marshall today announced that the facility will be open from Monday, July 24.
“This will be a big day for many in the community, who use the Hydrotherapy pool for rehabilitation, exercise and swimming training,” Mr Marshall said.
“The process was delayed as the health service uncovered additional problems with the pool – and what started as a filtration issue quickly became a major overhaul of the facility.
“The water filter has been replaced with a much more advanced reverse osmosis setup, ensuring quality at a reasonable temperature without the addition of excessive amounts of chlorine,” Mr Marshall said. “This will make the pool much more comfortable and pleasant to use.
“Engineers also noticed that the roof was beyond repair – so a contractor has completely overhauled the structure to ensure the safety of pool users.
“All in all, it feels like an entirely new facility. The new filtration technique means the smell of chlorine is all but gone, and a new roof has refreshed a room virtually unchanged since the 1980’s.”
Mr Marshall said he shared the community’s frustrations over the delays, noting the lack of notice before the pool closed.
“I’ve been fighting for this process to be expedited since the hydrotherapy pool unexpectedly closed its doors in January,” Mr Marshall said.
“It’s taken far too long for the necessary works to be done, and with limited community consultation throughout. However, I appreciate the Health Service’s eventual commitment to fully fund the project.
When reopened, the new facility will be ready to service the community for years to come – but Mr Marshall said upgrades wouldn’t serve as a silver bullet.
“When the pool reopens, it will give us some breathing room to investigate long-term options for the Hydrotherapy Pool in Armidale,” Mr Marshall said.

“These upgrades won’t last forever, and eventually another issue will appear at this aging facility, which could threaten to close its doors once more.

“The community has spoken emphatically that they would like to see this service continue, however its future may lie elsewhere in town.

“I’d like to continue investigating options across Armidale, so that the people of the Northern Tablelands can be assured that they will continue to have access to a hydrotherapy pool well into the future.”