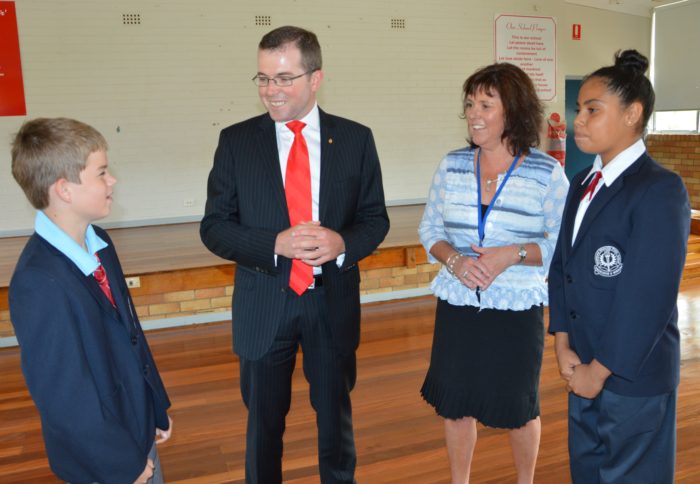 During a tour of the school with Relieving Principal Louise Moffatt, school captains, staff and students, Mr Marshall also highlighted the importance and benefits the Gonski education reforms had already brought to the students and staff at Drummond.

“It’s great to be back here at Drummond to see some fresh paint on the buildings and new floor coverings in the classrooms,” Mr Marshall said.

“Not only has Drummond and other local schools, such as Armidale City Public, befitted from minor revamps over the holidays, but every school in our region is reaping the benefits from the injection of extra recurrent funding through the Gonski and NSW Government education reforms.”

Mr Marshall said that the positive impact of the reforms was already being felt throughout the Northern Tablelands, less than two years in, with an extra $6 million of recurrent funding to the region’s 52 public schools.

“At Drummond, the difference is stark – the school has experienced a funding increase of 118 per cent over the last two years, an extra $165,900 of recurrent funding, and there’s more to come!

“I saw yesterday what a huge difference that funding is making to the resources and support Drummond can offer all its students, from extra programs for, specialist training for staff and new technology.

“Drummond has employed additional English as a Second Language (ESL) teacher for two days a week to assist the 35 students who are learning English as a second language. Additionally, new smart boards, extra computers and teacher’s aides have been secured utilising this funding.

“The real advantage for schools is that not only do they receive the extra recurrent funding under Gonski but via Local Schools Local Decisions reforms, the schools determine where the money is spent to best meet the needs of their students.”

Mr Marshall has renewed his call for the Federal Government to reverse its decision to only fund the first four years of Gonski and join with the State Government in offering the very best start in lift for our country students and fund the full six-year Gonski package.

“Students in country schools deserve every opportunity available and they are the ones who benefit the most under Gonski – that’s why I am a passionate supporter and why the Federal Government should be too,” he said.