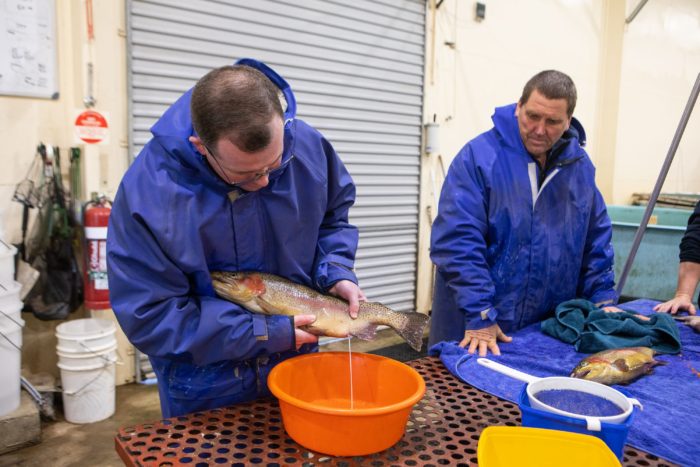 Agriculture Minister and Northern Tablelands MP Adam Marshall stripping eggs and fertilising them, under the watchful eye of Hatchery Manager Peter Selby as part of the Ebor Trout Hatchery’s breeding program this week.

Mr Marshall visited the hatchery this week and tried his hand at ‘stripping eggs’ from female Rainbow Trout, as part of the hatchery breeding program.

Mr Marshall said the facility produced more than 1.6 million trout each year – around 1.3 million rainbow and 300,000 brown trout fry and fingerlings, in support of the State’s valuable recreational fishing sector.

“These fish are stocked in streams and impoundments throughout the New England and Central Tablelands to support our fantastic trout fisheries and all the socio-economic benefits that trout fishing offers,” Mr Marshall said.

“The breeding season has commenced here at Ebor with both brown and rainbow trout being stripped of eggs and laid down for hatching, primed for stocking from October through to December.

“In conjunction with the Gaden Trout Hatchery at Jindabyne, this is part of our overall stocking program of 3 million trout and salmon produced each year.

“While the drought is not over, good rainfall has seen rivers and streams in much better condition and with further rain we are hopeful that the Hatchery can undertake a full stocking season as part of the comprehensive drought recovery program.”

Fish produced at the hatchery also travel further afield and 1,000 tagged Rainbow Trout about 300mm in size were recently released into Lake Lyell and Lake Wallace in the Central West.

More than 500 of the tagged trout have been released as part of a study of growth rates and survival from redfin predation, and inclusion in the NSW Trout Strategy which aims to future-proof the recreational trout fishery.

“We’re very fortunate to have the State’s premier trout hatchery in our region and the dedicated team of staff here do an outstanding job keeping trout stocks at healthy levels throughout our State’s waterways,” Mr Marshall said.