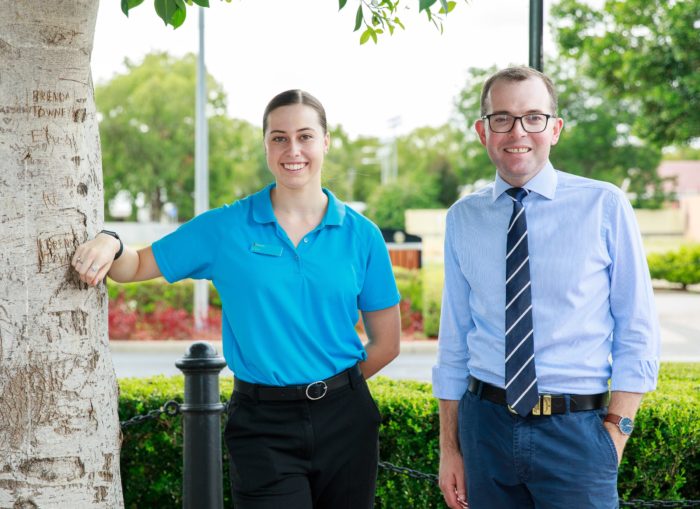 Elka Devney, left, and Northern Tablelands MP Adam Marshall discussing what she hopes to take from her involvement in the 2021 NSW Regional Youth Taskforce.

MEMBER for Northern Tablelands Adam Marshall has today congratulated Moree’s Elka Devney and Inverell’s Imogen McDonald, who have both been appointed as members of the State Government’s 2021 Regional Youth Taskforce.

Mr Marshall said the pair were thoroughly deserving of their new roles, as part of the second-year cohort of the Taskforce, and they would help build on their predecessors’ achievements, which included improvements to education, digital connectivity and public transport.

“I am delighted that Elka and Imogen nominated and were appointed to Regional Youth Taskforce,” Mr Marshall said.

“They are both outstanding young women and will be excellent representatives for our region and their peers.

“In the past I have had the privileged of seeing first-hand the positive impact these young women have had on both their peers and community.

“Through her involvement with organisations such as the NSW Rural Women’s Network, the Department of Education and Moree Secondary College Aboriginal Education Consultative Group, Elka has become a strong advocate for regional education, campaigning to ensure rural youth have the same access to services as metropolitan youth

“Similarly, Imogen is a natural leader and a fierce advocate for social equality.

“Ardent about gender inequality, climate change and indigenous affairs, in 2019, she was one of 17 national winners of the Australian Country to Canberra leadership competition.

“Imogen is particularly passionate about improving the mental health of young women and getting girls in regional areas involved in progressive movements and ideas to reduce gender inequality.

“I really look forward to hearing the strategies Elka and Imogen bring to the table which support the State Government in addressing the wide range of issues impacting young people from the regions.”

Mr Marshall said the Regional Youth Taskforce had already been a catalyst for positive changes in country NSW.

“The 18 new members will drive policy change and advocate for real outcomes for young people, continuing to be the voice of regional youth at the highest level in their State,” Mr Marshall said.

“This group, which includes two young people from each of the state’s nine regions, will meet for the first time later this month in Coffs Harbour to discuss the topic ‘work-readiness’, one of the pillars outlined in the Regional Youth Framework.”

For more information on the Regional Youth Taskforce, visit www.nsw.gov.au/regional-youth-taskforce.