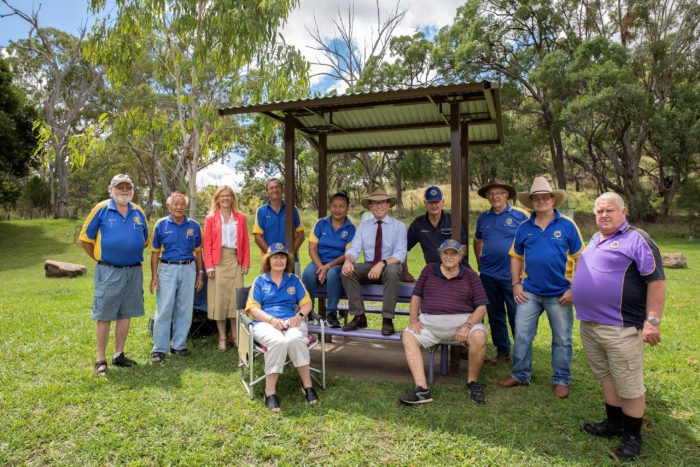 THE addition of new amenities at a popular camp site at Elsmore is hoped to reduce vandalism and increase visitation, with Northern Tablelands MP Adam Marshall today announcing an $89,714 State Government grant for improvements at Joseph Wills Park.

Mr Marshall said past damage to the recreation reserve’s amenities had prevented the area from being utilised to its full potential.

“Located on the banks of the stunning Macintyre River, Joseph Wills Park has been a popular pull-over for grey nomads and campers for almost 37 years,” Mr Marshall said.

“While the site has successfully drawn visitors to Elsmore, it has also attracted vandals, who senselessly damaged the existing wooden shade structure with an axe.

“In order to prevent future damage a new 6m x 4m powder coated steel structure with colorbond roof will be installed on site.

“Also, an anti-vandal amenities block will be built, this time above the flood level, which will include hand washing facilities, adequate water supply and meet accessibility requirements.

“Though the park is Crown Land, since 1985 it has been maintained by volunteers of the Inverell Macintyre Lions Club, which built the amenities originally.

“The care which has gone into looking after Joseph Wills Park for all these years is a credit to the organisation. I expect Inverell Macintyre Lions Club will welcome these changes as it helps reduce the future workload.”

“Recreational fishing is an important leisure activity in our region and council is always looking for ways to increase access to this popular pastime which contributes so much to the local economy.

“This project will be delivered by February 2023, with local contractors and council staff undertaking most of the work.

“Elsmore is a hidden gem which deserves to be shared by everyone. I expect as word gets around the grey nomad community that Joseph Wills Park has new amenities there will be a lot more visitors calling by and enjoying this special part of the world.”