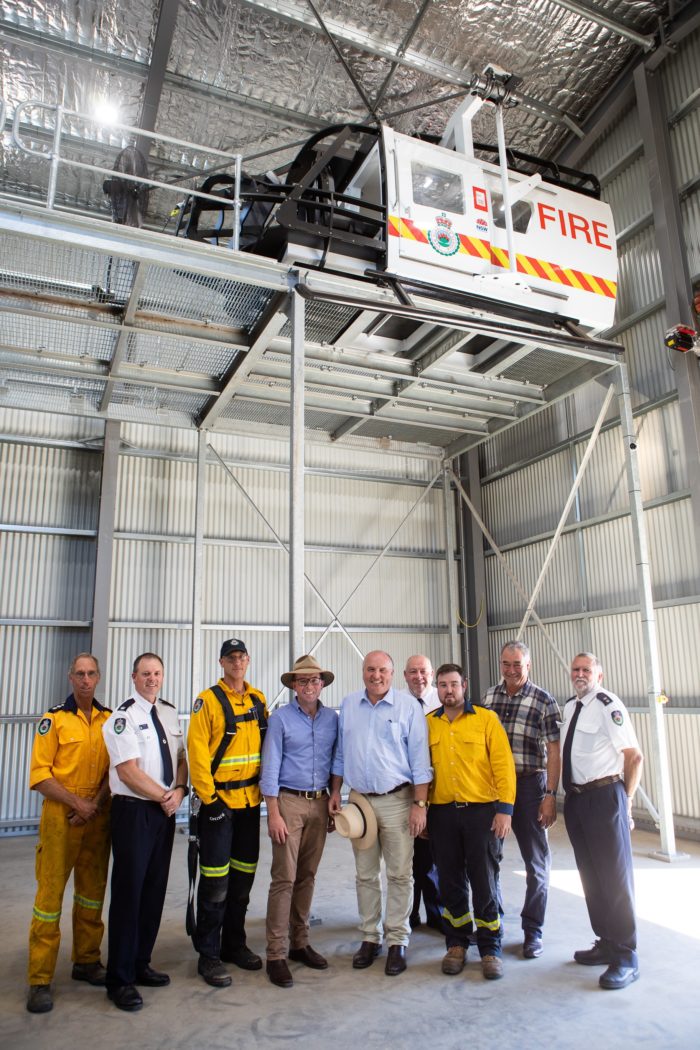 RAPPELLING from a helicopter by a winch will all be in a day’s work for local fire fighters with Northern Tablelands MP Adam Marshall and Minister for Emergency Services David Elliott officially opening the NSW Rural Fire Service’s (RFS) helicopter winch training simulator at Armidale yesterday.

The winch has been included as phase 2 of the $734,000 Remote Area Firefighting Facility (RAFT) located at Armidale Regional Airport.

Mr Marshall said the unique facility was the only one of this kind in the State, north of Sydney.

“Every time a RFS volunteer connects themselves to the winch cable and is lowered from a helicopter onto a fire ground they are putting their lives at risk,” Mr Marshall said.

“Using world class technology the simulator lowers personnel from a makeshift helicopter to the ground, recording their actions and allowing them to master the skill in a controlled environment.

“Since its instillation there has been two training courses put through the simulator, with thirty two RFS personnel successfully updating their winching skills just in time for the current devastating fire season.

“Because of how unique this training facility is other emergency services including NSW Police and State Emergency Service (SES) have shown interest in their volunteers also learning to winch out of Armidale.”

Mr Marshall said since bushfires started in the region in September the RAFT base has played an important role supporting aerial water bombing efforts across the region.

“The unprecedented fires of the last four months have really challenged the capacity of the RFS,” he said.

“The aerial support has been absolutely invaluable in helping crews get a handle on fires as they ignite, and I’m pleased Minister Elliott has been able to see firsthand the work taking place out of the airport.

“I now look forward to working with Minister Elliott and New England RFS towards establishing a new regional fire control centre alongside the RAFT facility.”