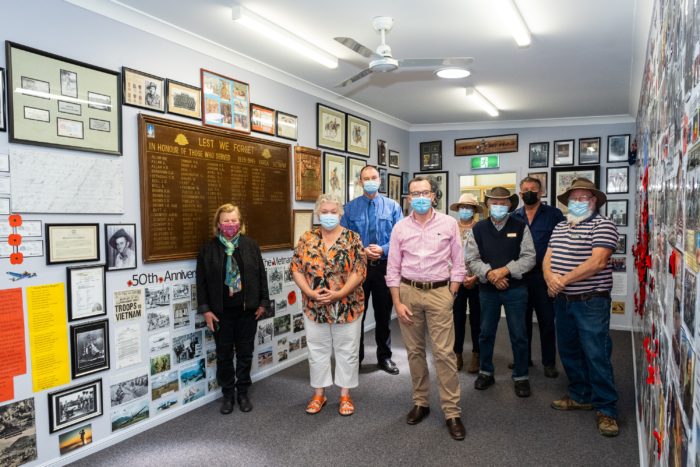 “This is an incredibly exciting time for the community of Emmaville, with the museum’s committee in the process of moving each of the precious items into their new home,” Mr Marshall said.

“The building, located at the back of the museum, is a fitting tribute to the 300 local men and women who left their homes and families to serve their country during World Wars I and II.

“Specialised cabinets have been built to protect the integrity of documents, including photographs of local service men and women and war records, original uniforms and service records.

“Painting and carpet have given the room a professional finish.

“Everyone who has been involved with this project should be very proud of the finished product and the huge effort put into collating this important history.

“I look forward to seeing the full display once the building officially opens early next year.”

The collection is the result of a 2015 community project, initiated by Emmaville Hospital staff Dell Brown and Dale Stapleton, to commemorate the 100th anniversary of the Gallipoli landing.

Emmaville Mining Museum Committee Secretary Evan Brown said he looked forward to the display being open to the public.

“I think the display will provide a fitting tribute to the men and women of our community who served in the many conflicts in which our country has been involved,” Mr Brown said.

“The community is excited about the addition to the Mining Museum, and in fact we are still receiving items and photographs from locals for inclusion in the display.

“With such a huge number of pieces now in our care we are going to need additional display cases. The committee is working with Glen Innes Severn Council to see if there are any funds left over from the build which can be used for this.

“This display just adds another aspect to a small town museum that already has an enviable reputation Australia wide.

“Some visitors who represent organisations with interest in our country’s military history, have indicated that they wish to organise bus trips to our museum once the display is completed, which will be great for our little economy.”