EMMAVILLE SHOOTERS HIT THE MARK WITH FUNDING FOR TARGETS 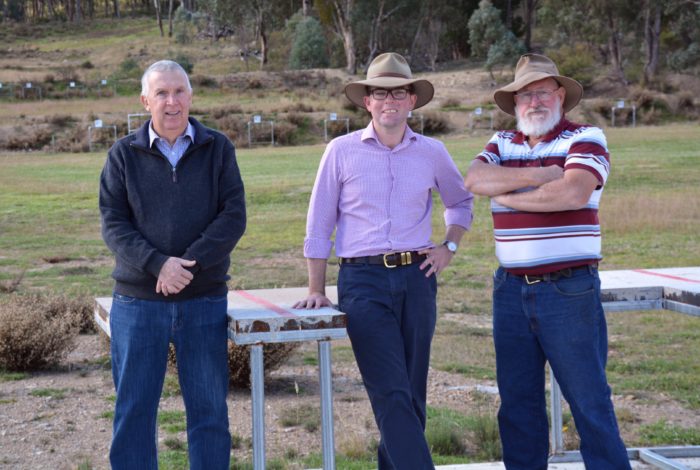 IN its 100 years of operation, the Emmaville Rifle Range has acquired a certain rhythm: the crack of .308 fire, the clack of a bolt withdrawing, the clink of a shell casing hitting the concrete floor. Now, it will add another note to its shooting symphony – the gentle whirring of an electronic target system on its short pistol range.

This new equipment will rapidly rotate targets 90 degrees, giving them a nigh-unhittable profile – with the limited window to take a shot giving shooters the option to shoot service pistol snap competitions.

The two-bank targeting system is just one part of a an almost $23,000 NSW Government Safe Shooting Program funding injection for the club, which will improve comfort, safety and extend options for competition at the range.

Member for Northern Tablelands Adam Marshall said the upgrades would help the club expand and attract new events to the region.

“Shooting has long been a popular sport in the region – but despite drawing hundreds of members and shooters, the Emmaville range is virtually unchanged since it was used to train soldiers in World War I,” Mr Marshall said.

“The Range Committee and local SSAA branch have big plans to attract ever more members and competitions to the range. This funding will mean they can host more technically difficult shoots, with more attractive and functional amenities to attract more members.

“Local shooters have already demonstrated serious initiative with several self-directed expansions and infrastructure recently built on the site. These upgrades will provide a nice boost to hard work undertaken by the range committee and shooting clubs.”

“They can shoot their ISSF matches the way they’re supposed to be shot,” Mr Brown said. “So people who shoot here, can then get enough training to go to zone or interclub shoots.”

Included in the funding is $6,015 to install hot water, showers and lighting to the existing toilet block. Additional lighting will mean shooters can keep practising a little later in the day – with showers allowing for overnight competitions in relative comfort.

The SSAA Branch views this as essential to attracting new members – in particular, women and children.

“Men and women can compete equally against each other. The only time you might need a little more physical strength is if it’s a heavier rifle.”