EMMAVILLE SHOOTERS TO LIGHT UP TARGETS WITH $26,219 RANGE UPGRADE 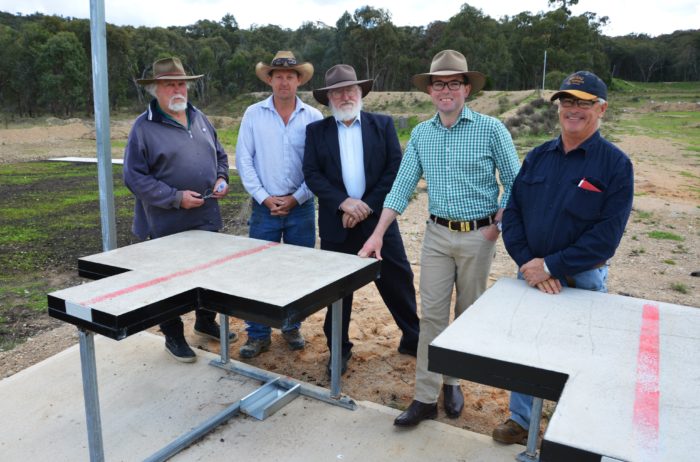 EMMAVILLE’S sporting shooters have a brand new range in their sights, with a $26,219 electrical infrastructure upgrade to lay the groundwork for a total overhaul, courtesy of the NSW Government.

Member for Northern Tablelands Adam Marshall announced the Public Reserve Management Funding recently when he met with Emmaville’s shooters for a morning on the range.

“Emmaville’s Rifle Range Committee is one of the region’s most energetic and proactive shooting clubs and this funding is the silver bullet to their current infrastructure frustrations,” Mr Marshall said.

“This funding will allow the club to move an existing 11kVA power pole, buy a new 25kVA transformer and metering equipment and install an underground supply to the range.

“This will allow the club to connect directly into mains power for the first time.

“The club has a comprehensive plan for expanding the facilities and shooting options on the range – but most of it relies upon having access to cheaper, reliable power.

“With electricity upgrades now locked and loaded, shooters no longer have to drag out expensive and heavy generators every time they want to have access to power.”

The first utility to be connected to the grid will be their turning target system, recently installed thanks to another $23,000 NSW Government grant.

Emmaville Rifle Range Committee Secretary Evan Brown said with the infrastructure expected to be installed in the next eight weeks the club would soon be able to pull the trigger on a wide variety of upgrades.

“What we need is stair lighting so people don’t trip on stairs, toilet lighting and irrigation equipment to keep the range looking its best,” Mr Brown said.

“Our last grant gave us a bank of ten turning targets and for us to run that we currently need to bring a generator out. Soon, it will just be a matter of flicking a switch.

“We’ve got long-term plans to build a clubhouse, install toilet and shower facilities, install water storage dams and much more. Without power, we can’t do any of that.”