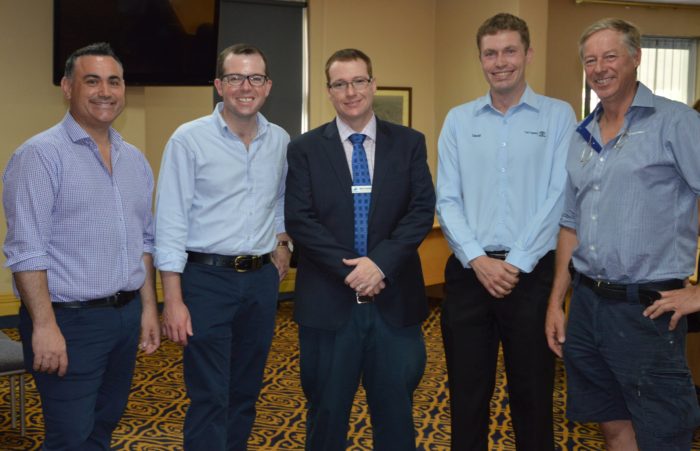 MOREE Plains Shire Council will use a $36,000 funding injection from the State Government to boost some survival, self-help and skills and services success for local businesses, according to Northern Tablelands MP Adam Marshall.

Mr Marshall today welcomed Deputy Premier and Regional Development Minister John Barilaro to Moree to join him in announcing a double-barrelled boost for business under a program designed to help alleviate the impact of the Murray Darling Basin Plan.

Mr Marshall said the council had won two grants of $20,000 and $16,000 for two local projects designed to get an accurate profile and picture of the labour market and where the jobs gaps are in the shire area and the skills assistance needed to fill those.

“The second project will see a targeted business study of the local economy that specifically will focus on how management expertise and staff skills can be improved and the services local business identify as being critical to that,” Mr Marshall said.

Mr Marshall said the skills development projects would give the council and the local chamber of commerce a direct and tangible tool to help businesses to innovate and invest in new opportunities and stimulate jobs growth in the local area.

Moree Plains planning and development director Angus Witherby said a seminar series hosted by the local chamber of commerce would use successful local businesses to help identify key business success “drivers” that weren’t simply an imported and foreign business model – but one built on local skill sets and attuned to recent drought and economic volatility as a result of changes associated with implementing they Murray Darling Basin Plan.

Mr Witherby said many businesses were stressed in terms of capacity and staffing and some were even in “survival mode”, so it was difficult for businesses to perceive the need for or engage in traditional economic support programs.

“The second prong of the projects will see a labour market study of the potential available labour force within Moree Plains Shire,” he said.

Areas of skill shortfall could then be identified and a targeted local training program developed in association with TAFE NSW and local labour market programs.

“We know the shire has a very strong agricultural base, including grains, cotton and cattle, and a number of these enterprises are potential generators of significant jobs, at times up to several hundred jobs,” Mr Marshall said.

“But we also know Moree has a significant unemployment issue related to many of those agricultural and seasonal jobs disappearing because they were associated with, in particular, the irrigation industry which has contracted sharply as result of the Murray Darling Basin Plan. There is also a significant under employment issue where people are often in part-time work who would prefer full-time work.”

“Potentially this means that Moree Plains Shire has the capacity to provide a workforce for new enterprises who might be looking to establish in the area and who have a clear understanding of the staff profile that they require.

“So the desktop review would also use existing data to get a better understanding of the employment and under-employment characteristics of Moree as compared to other similar sized towns which aren’t experiencing the same level of economic stress.”

He said it would help ensure the future of the local regional economy for years to come.

“This funding provides support that will build a local regional community where our spouses have a place to work, our children have a place to go to school and the local grocer still greet us with a smile when we do our weekly shop,” Mr Barilaro said.

Mr Marshall said the Moree shire contributed some $750 million in gross regional product mainly from agriculture and as the most agriculturally productive local government area in Australia, it deserved funding tools to keep it ahead of the bunch.