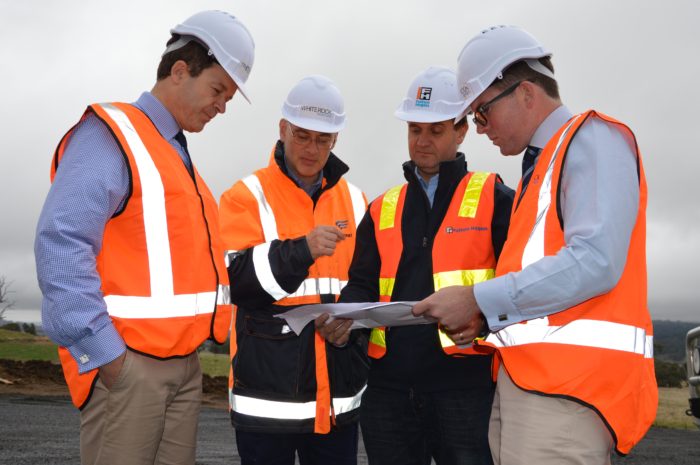 ENVIRONMENT Minister Mark Speakman got a first-hand look at the construction of the State’s largest wind farm project last Friday, during a visit to Glen Innes.

Northern Tablelands MP Adam Marshall invited the Minister to tour the region, including a visit to the site of the White Rock Wind Farm. He said the Minister was impressed with what he saw.

The $400 million, 175-megawatt White Rock Wind Farm will initially have 70, 2.5-megawatt turbines, but planning approval has been granted for 119 turbines.

The farm is expected to have the capacity to power about 75,000 homes once fully completed. The project will be worth about $35 million to the area around Glen Innes during construction wind farm, which is worth $400 million.

Mr Marshall said the Minister was amazed at the scope of the construction.

“The Minister was blown away by the size and scope of the project,” he said. “Access roads are being constructed through to the site where the TransGrid substation will go and then onto connect every turbine.

“Everything is on track for the first turbine blades and towers to starting coming through Glen Innes in September.

“It’s all very exciting for the region and Glen Innes in particular.”

Mr Speakman said he was keen to see the project for himself after Mr Marshall had been talking it up for so long.

“I was really keen to speak with John Titchen and see the progress of the project,” he said.

“I am very impressed with the project and I look forward to seeing it get under way and progress.”

“Up to 200 people are expected to be involved during construction of the project and a 10-15 local service team will be needed once the wind farm is operating,” he said.