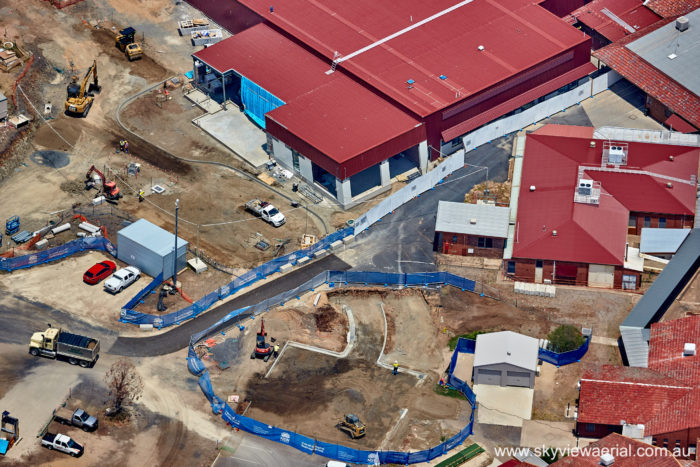 The latest aerial photograph of the Inverell Hospital building site shows the concrete slab for the CT scanner room.

WITH the Christmas break only three weeks away tradies are working around the clock to finish the internal works on the new Inverell District Hospital building, according to Northern Tablelands MP Adam Marshall.

Mr Marshall said today that every month a new milestone was being reached on the $60 million project, with latest being the completion of the building’s external cladding.

“It’s amazing to see how quickly this new building is coming together and I’m delighted to say it is well on track to be finished by the middle of next year,” Mr Marshall said.

“At the moment there is an army of tradespeople on site chipping away at internal works like painting walls and installing the fittings, which will contribute to the modern and welcoming feel of the new hospital.

“In August I announced a Computerised Tomography (CT) scanner would also be included as part of the new hospital and the concrete slab for the CT room has already been laid.

“With the finish line in site for Stage 1 of the redevelopment the project team has been hosting pop-up community updates in Inverell’s CBD and it’s been really great to hear the positive feedback and enthusiasm for the new hospital coming from the public.”

Mr Marshall said planning was also complete for the refurbishment of the old hospital building.

“For more than 60 years the old hospital has been a part of the Inverell community and I’m so happy that is going to continue well into the future thanks to this major upgrade,” he said.

“The old facility will become the home of Inverell’s ambulatory and community health services offering mental health support, treatment for chronic disease and care for women and children.

“The design work for the refurbishment is now done and tenders for parts of the project have been called for by NSW Health Infrastructure.

“The plan is the refurbishment will take place as soon as all the old hospital is relocated into the new building towards the later part of 2020.”