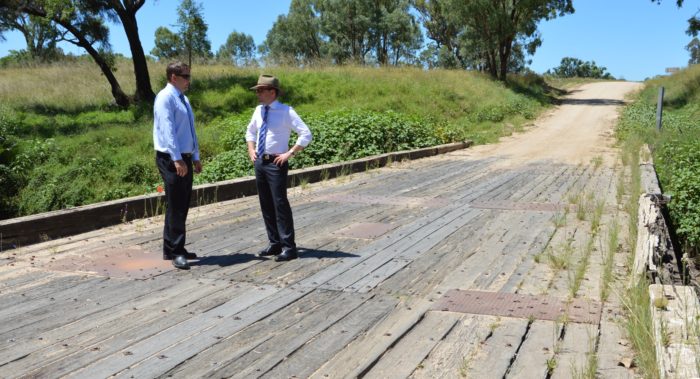 Mr Marshall said the government had last year provided $300,000 for the bridge’s replacement as part of the Fixing Country Roads program round 1 allocations and that today’s extra funding would allow the project to be fast-tracked.

“Tin Tot is the last remaining timber bridge in Inverell Shire and will be the 19th timber structure replaced by council over the last 16 years – an impressive effort,” Mr Marshall said.

“The bridge doesn’t meet current freight demands and is in poor condition. I’m delighted to announce this additional funding which will see Tin Tot soon replaced with a modern concrete structure.

“Replacing it with a new and higher bridge will deliver a safer journey for road users and a more efficient freight route which will provide major benefits for the community and the region.

“Inverell Shire Council is also contributing $200,000 of its own funds towards this $1 million project. This additional funding reinforces the government’s commitment to improving infrastructure in country NSW.”

Inverell Shire Mayor Paul Harmon said council and community appreciated Mr Marshall’s advocacy for the funding and the support of government for the project.

“This partnership between the state government and council will deliver a much-needed bridge for the residents of the northern part of the shire,” Cr Harmon said.

“The Tin Tot Bridge was always going to be replaced but this funding has allowed us to bring forward the project and provide the community with a structure which will alleviate the significant problems they face when the creek is flooded and the bridge closed.

“The bridge goes out very early during heavy rains events and can be closed for quite a while. The new bridge will be a lot higher and create a reliable pathway for local road users.

“We will be going to tender shortly as specifications have already been prepared and we expect construction to begin in early in the next financial year.”