FAMILY HISTORY RESEARCH IN ARMIDALE GETS A WHOLE LOT COOLER 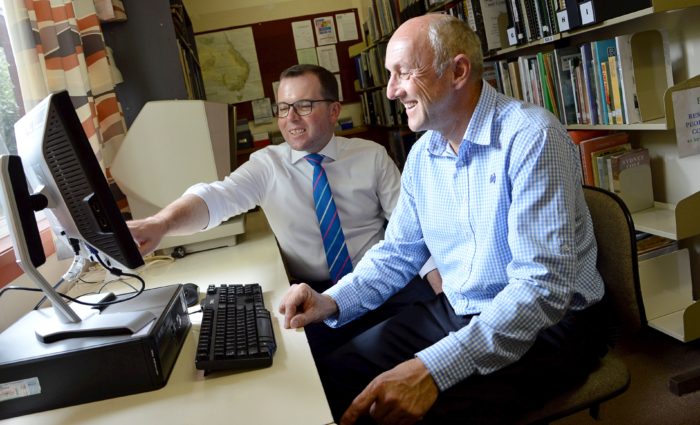 NORTHERN Tablelands MP Adam Marshall has announced funding for the Armidale Family History Group that will improve the research environment for those searching the history files at the Kentucky Street research centre.

Mr Marshall says the group will receive a $3,878 grant from the State Government to install a modern air-conditioning system and provide thermal curtains so local history buffs and visitors trying to trace their family roots can do it in more comfort.

“There’s no aircon in the research centre at all, they rely on radiant heaters in winter, but this funding means they can cool the heat and warm the cold for those extremes of temperature we can get in Armidale in summer and winter,” Mr Marshall said.

Armidale Family History Group president Wayne Hoppe said the centre had operated out of its Kentucky Street home for 21 years – and the grant was a great coming-of-age gift.

“It’s a brick building and heating is one thing that’s been killing us and everyone who uses it is getting older, and the elderly do feel the extremes of temperature, so it’s great to get this grant,” Mr Hoppe said.

“We’ll have reverse cycle air conditioning in the main research room and open to the library and the filing room, while thermal curtains will also go up to better help keep the temperatures more stable.

“The family history group has been going for 33 years and we have a core group of regulars and about 200 members.”

Mr Marshall said the group had a library of about 4000 resources, mainly in books, but including CD’s, microfiche, pioneer registers and other records, and had probably one of the biggest Family History libraries in NSW.

“Family History research has become an important area in community life; a lot of people of course search online and through websites like DNA, but that’s only one portion of family research; you might get the skeleton of your history but groups like Armidale actually help with fleshing out the bones,” Mr Marshall said.

“They don’t only support local research; there’s a substantial number of visitors, tourists and travelers, who drop in to get some history help because they have records from right across Australia.”

Mr Hoppe said the centre was really about adding to individual research, by providing volunteers who could help with research to uncover, with people who could assist someone, because they’d been there and done that before with their own family history.

This year they’ve also taken on a massive community project, courtesy of another grant delivered last year by Mr Marshall, to document the headstones of Armidale Cemetery.

“That’s been a huge job, they’ve put in about 1000 hours of work to it, and they’ve taken photos of all the headstones in the cemetery, with a view to digitizing that as another resource for the centre,” Mr Marshall said.

Mr Hoppe said about 14,000 burials had been recorded in the cemetery, although many records dating before 1,900 were missing.

“We’re also writing the story of the stonemasons, but the project is a major work for us, and we expect to have it ready in the next six months.”