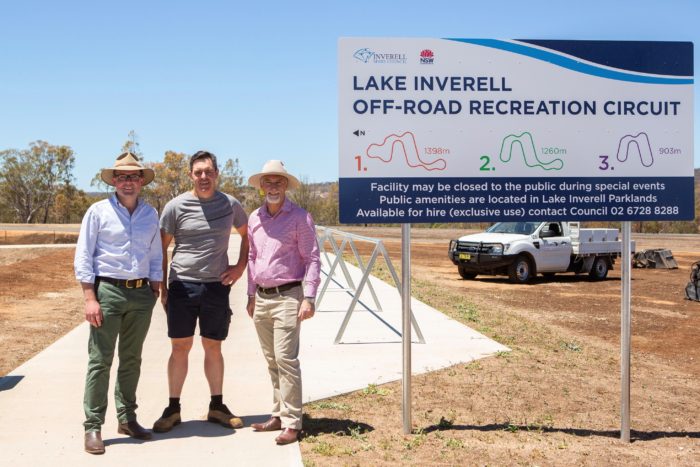 Mr Marshall said the sealing of the 1.5 kilometre loop marked the run to the finish line for the exciting development.

“Inverell is only days away from having a first class cycling criterium which will draw some of the country’s best competitive riders to our region,” Mr Marshall said.

“This week Inverell Shire Council staff are continuing to lay the final, high quality asphalt seal before they move onto line marking and the total completion of the project.

“Council has already finished building footpaths, a storage shed with shade and car park which have made the site very accessible to the public, no matter their age or level of fitness.

“What’s great about the criterium is it’s not just a facility for bike riders but an area which offers health benefits for the entire community and from early reports its already seeing high traffic with parents taking their kids for a ride after work, fitness groups going for a run and older people utilising the footpaths.

Mr Marshall congratulated Mayor Harmon and Inverell Cycling Club President Andrew Blake for their planning and vision to get the criterium off the ground.

“I really think sports tourism will be one of the key economic driver for Inverell into the future,” he said.

“Whether it’s the $5 million redevelopment of Copeton Dam’s northern foreshore or the construction of the town’s new athletics precinct Inverell will soon have some of the best all round sports facilities in northern NSW.

“From this I expect we will see hundreds of different teams and competitors flocking travelling to Inverell to complete, booking into accommodation, eating at local restaurants and all spending vital dollars in the community.”