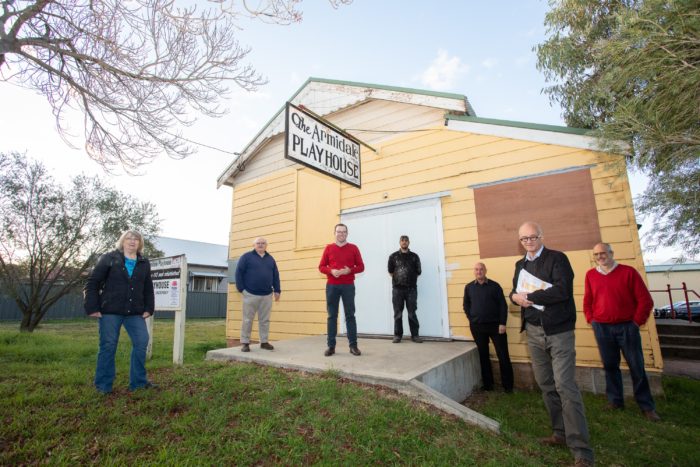 THE players have been cast, the stage is set and construction is underway on the long-awaited $436,661 redevelopment of the Armidale Playhouse Theatre, a project which will deliver a permanent home to the city’s amateur thespians, Northern Tablelands MP Adam Marshall said today.

Mr Marshall announced the State Government funding for the project, with building contractors onsite already at the historic building on Beardy Street.

“It’s been 15 years since a performance was last staged at The Armidale Playhouse and now the biggest show in the venue’s history is underway,” Mr Marshall said.

“Armidale building contractor James Paliadelis has secured the leading role in the project and has wasted no time getting to work with some of the internal walls already removed.

“Over the next six months the inside of the building will be fully refurbished with a new green room and spacious dressing rooms installed and walls reconfigured to accommodate larger audiences and productions.

“Inside the main hall a load bearing beam will be put in allowing the stage to be extended and seating for up to 110 patrons to be established meaning once again musicals can be held at the theatre.

“The carpark will also be upgraded to include designated parking spaces and disabled parking improving the venues accessibility.”

Mr Marshall said the Armidale Playhouse Restoration Committee had called on the community to help fit-out the venue with seating.

“Once the structural restoration is complete, the final stage of the project will be to install more than 100 high quality seats,” he said.

“Members of the public can purchase a seat through the Armidale Dramatic and Musical Society’s website. The purchased seat will have a plaque with the purchaser’s name on it, recognising their generosity.

“Once this project is complete Armidale will have a suite of high quality venues where dramatic and musical productions can be staged, including the TAS Hoskins Centre and Armidale Showground.”