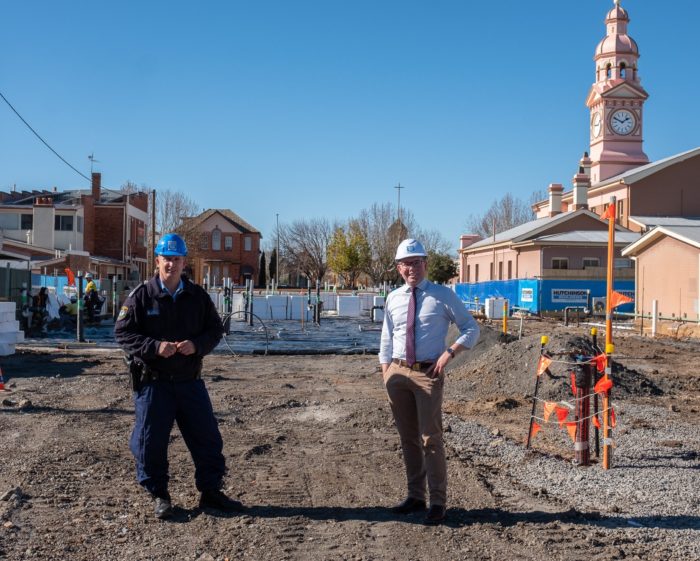 THE demolition team has moved out and the builders and concreters have rolled in as work begins on pouring the foundation slab for the new $16 million 24-hour Inverell Police Station.

“With the 60-year-old Inverell Police Station finally pulled down now it’s time to start building up, with this week contractors, Hutchinson Builders, getting underway with the all-important foundation works,” Mr Marshall said.

“With the site now fully cleared of the old building the first two concrete ground pours are scheduled to go down.

“This work will pave the way for the building’s supports to be installed, with reinforcing and concreting for the rear carport footings also expected to take place over the next two months.

“Excitingly, from August, the new station will really start to take shape with precast concrete panels to be erected on site which will make up part of the building’s external façade.”

Mr Marshall said the construction of the building’s external shell would offer the community its first real indication of the size of the new two-storey building.

“Up until now it has just been artist’s impressions on a board, but from the end of August we will see those drawings come to life in the form of a modern 24-hour police precinct,” he said.

“With room for more than 60 police officers, new undercover parking bays, plenty of storage space, new main access, holding cells and secure fencing, it’s incredible to think this building is being constructed on the same footprint as the original cramped station.

“I want to acknowledge the hard work of Inverell Police as they continue to serve the community from their temporary station on Campbell Street.

“I also congratulate Hutchinson Builders on the work they have done to date and look forward to watching progress on the station now it is in construction phase.”