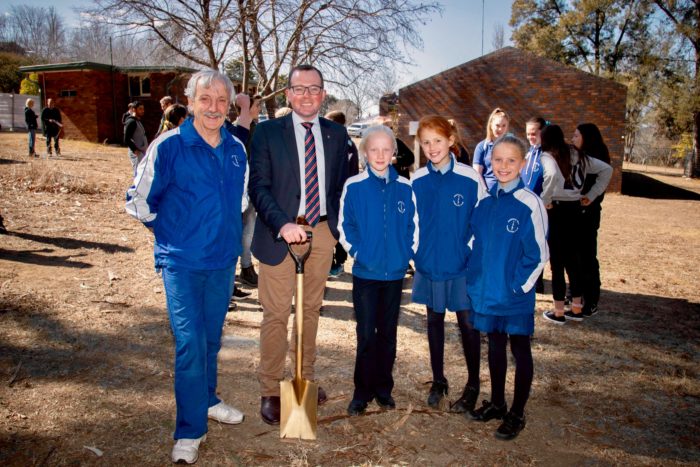 ARMIDALE Gymnastics Club is about to launch itself to new heights with Northern Tablelands MP Adam Marshall turning the first sod on the $1.4 million redevelopment of its home, the New England Movement and Adventure Centre (NEMAC), last week.

Last year Mr Marshall announced a $998,039 grant from the State Government to allow the club to significantly increase the amount of disciplines it provides to the region’s gymnasts and equipment and facilities available  to the wider community.

Mr Marshall said the exciting redevelopment would double both the facility’s size and membership.

“Over the coming months we will see the NEMAC transformed into a state-of-the-art regional gymnastics precinct that will be the best anywhere north of Sydney,” Mr Marshall said.

“It will give us the facilities to potentially train right here our very own next Commonwealth of Olympic gold medalist.

“It will also add amazing new facilities for the broader community, like the new ninja warrior equipment for people to train and get fit.

The new building will have two stories – a  top mezzanine level to allow for inbuilt floor-level trampolines and a trench bar and an expanded bottom floor made up of the existing ground level.

Club coach Wally O’Hara said this once in a life time development will open new avenues to increase participation in the sport.

“With the craze of Ninja Warrior sweeping the nation, gymnastics is seeing a resurgence in young people wanting to take a leap and get involved,” Mr O’Hara said.

“Currently the club has more than 450 members and I expect this long awaited redevelopment will deliver a boom in participation with the inclusions of new apparatus and the FreeG course.

“I also want to thank Gymnastics NSW for supporting us through this process and allowing Armidale to host the next three Country Championships, commencing in 2020.

“These events will provide a significant economic boost to Armidale with each championship running for five days and drawing hundreds of competitors, their coaches and supporters to the city.”

Mr Marshall added the redevelopment would deliver both short and long-term economic benefits to Armidale.

“Every cent of the $1.4 million being spent on this project is going back into the local economy,” Mr Marshall said.

“Five different local contractors will be undertaking the construction and fit out of the centre, providing them with work well into next year.

“Sport has the amazing ability to stimulate an entire economy and over time I look forward to all Armidale’s accommodation providers, eateries and retail outlets being jammed packed with visitors, in town to attend competitions at the NEMAC.”