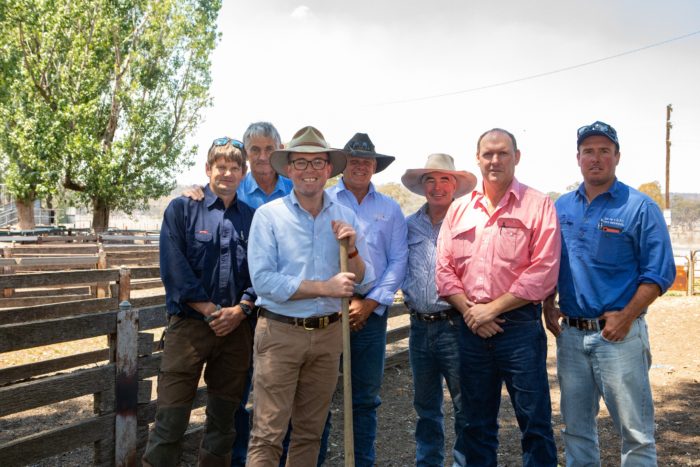 NORTHERN Tablelands MP Adam Marshall has called ‘salo, salo’ to mark the start of $1.25 million redevelopment of the Glen Innes Regional Saleyards sheep complex, the first project in NSW to be funded through the State Government’s $170 million Drought Stimulus Package.

Mr Marshall joined representatives from Glen Innes Severn Council and the livestock agents association last Friday to turn the first ceremonial sod of soil to get the project underway.

“This redevelopment could not come at a better time for Glen Innes with the community struggling during this devastating drought,” Mr Marshall said.

“Between now and early December work will begin to disassemble the old wood panelled sheep yards and erect a set of temporary yards to allow sheep sales to continue until the project is complete.

“Over the next few months the old saleyards will be revitalised with new sheep selling pens, loading ramps, upgraded amenities, installation of lighting and water troughs, sealed carpark and associated signage and landscaping.

“By the end of February Glen Innes will boast one of the most modern and functional sheep selling complexes in the Northern Tablelands and reinforce its position as a major selling centre.”

“The Drought Stimulus Package was established as a means of creating jobs and mitigating the negative employment effects which result from ongoing drought,” he said.

“All up over the five stages of this development local electricians, metalworkers and builders will be employed to construct what will be one of the premier sheep selling facilities in northern NSW.

“I congratulate and thank Council for the preliminary planning it had undertaken on the upgrades making it shovel ready when this funding become available.

“Overall this project is about keeping Glen Innes’ economy ticking over and if upgraded saleyards means we see more quality stock coming into market then increased buyer competition will follow, putting greater returns into the pockets of farmers.”