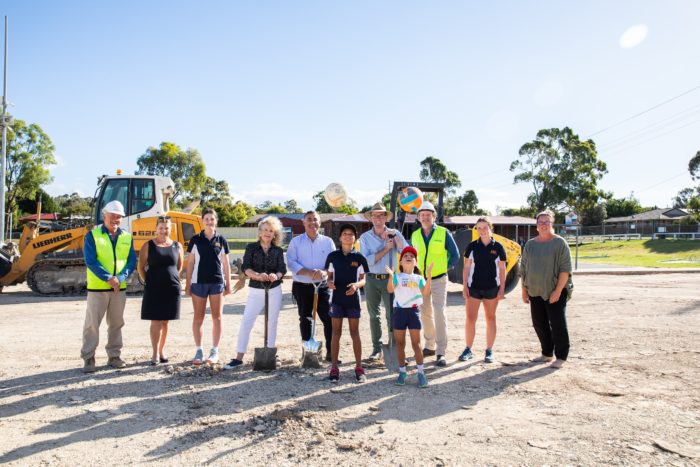 LOCAL netball players will soon have the confidence to move faster and attack harder, with work to replace and upgrade Armidale District Netball Association’s Lynches Road netball courts underway, thanks to $600,000 injection from the State Government’s Stronger Country Communities Fund.

Deputy Premier John Barilaro joined Northern Tablelands MP Adam Marshall last Friday to turn the first ceremonial sod of soil at the netball complex, where all 10 courts will be upgraded and rebuilt with new surfaces and improved drainage.

Mr Marshall said he was pleased work was underway on the project, which would make the courts safer and bring them up to first-class competition standard.

“The courts were in desperate need of replacement, with significant cracking, uneven surface and poor drainage threatening the safety of players,” Mr Marshall said.

“The 20-year-old surface was crumbling, with large cracks creating trip hazards for the players.

“The inability for water to escape off the courts when it rained caused instability in the surface and creating the need for costly, regular maintenance.

“To address these issues the surface of netball courts A and B will be patched and levelled before three-coat surface systems are installed. New acrylic playing surfaces and raised perimeter areas with turf will be installed on courts 1-8.

“These upgrades will enable Armidale to host netball carnivals involving players from across the New England region and encourage locals to take up the sport, improving health and fitness and helping people to socialise through sport.”

Mr Barilaro said the Stronger Country Communities Fund was helping to enrich the lives of residents in regional communities.

“Resurfacing the Lynches Road netball courts is exactly the kind of project Stronger Country Community Fund round two was designed to deliver and I congratulate the Armidale District Netball Association members on their commitment to this important project.”

The $500 million Stronger Country Communities Fund is part of the $2 billion Regional Growth Fund, which together with the $4.2 billion Snowy Hydro Legacy Fund is delivering once-in-a-generation infrastructure that generates opportunities, investment and jobs.

Round Four of the $100 million Stronger Country Communities Fund will open on 1 May 2021, with up to $50 million to be made available for the delivery and enhancement of women’s sporting facilities, including change rooms.

Guidelines and information on eligible applicants will be available on the Regional Growth Fund website in coming months.