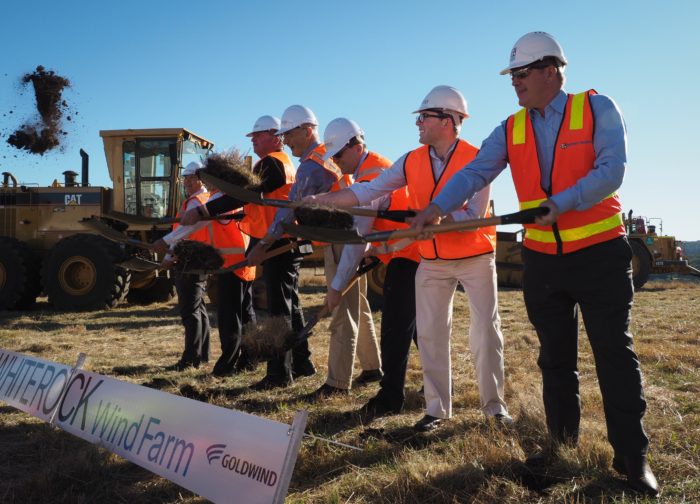 THE turning of the first sod at the first wind farm in the Northern Tablelands at the weekend is, Adam Marshall believes, a hugely important symbolic step for the region.

“Except for some defunct hydro schemes, this region has always been an energy importer,” the Northern Tablelands MP said. “All the time we have been importing energy, we have been funding the prosperity of other regions.

“Now that is changing. First with the Moree Solar Farm, and now with White Rock Wind Farm, we are at last using resources freely available to us to generate energy and keep jobs and revenue here, where the benefit is local.

Mr Marshall noted that Germany, which has been proactively investing in renewable energy capacity for years, hit a remarkable milestone on May 8 when it generated 87 per cent of its entire energy use from renewable sources.

“Germany has nearly four times Australia’s population living in just five per cent of Australia’s area,” he said. “If it can generate nearly all its energy from renewables, we can too.”

The $400 million, 175 megawatt White Rock Wind Farm will be Australia’s largest. The facility will initially have 70, 2.5 megawatt turbines, but planning approval has been granted for 119 turbines.

CWP Renewables has already signed a multi-million dollar contract with the Australian Capital Territory government to provide power for 110,000 homes.

Combined, the two wind farm projects will mean hundreds of millions of dollars worth of investment in the Glen Innes and Inverell communities, Mr Marshall said.

“There will be over 200 jobs in the construction phase, and around 30 ongoing jobs in keeping the windfarms running.”

Mr Marshall is supporting a push to have TransGrid build a renewable energy hub near Glen Innes.

“A hub would facilitate easier and cheaper access for wind and solar projects to the electricity grid in the Glen Innes district,” he said.

“This may encourage more companies to consider renewables projects in the area, because grid connection costs will be greatly reduced.”

Project approval was granted by the Department of Planning and Infrastructure on 10 July 2012 for the construction and operation of up to 119 wind turbines in addition to related infrastructure. The project will be staged with 70 turbines in the first stage. Construction completion is targeted for late 2017.

CECWPC is majority owned by the China Energy Conservation and Environmental Protection Group (CECEP) which is China’s largest technology-based service group in the field of energy conservation, emission reduction and environmental protection.

CECWPC was founded in 2006 and listed in Shanghai Stock Exchange in 2014, specializing in development, investment, management, construction and operation & maintenance of wind power projects.

High-quality manufacturing is the foundation for Goldwind’s business along with excellent customer service and technological innovation. Bloomberg New Energy Finance recently ranked Goldwind as number one in the world for newly installed capacity in 2015. In 2015 Goldwind installed more 7.8 GW with accumulated installed capacity exceeding 32GW.