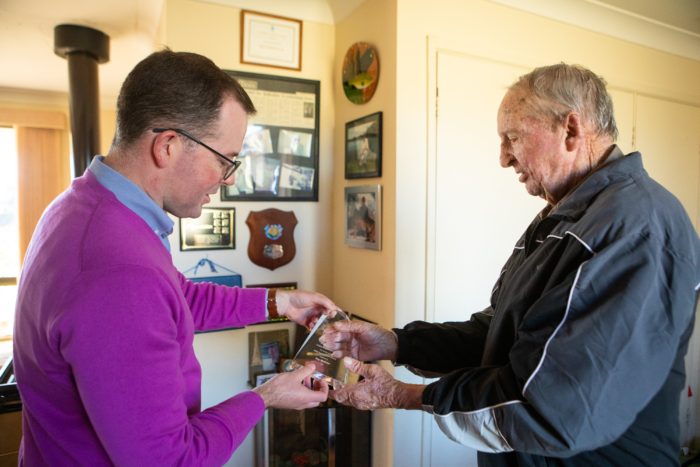 Northern Tablelands MP and Minister for Agriculture Adam Marshall, left, presents Ray Mepham with an outstanding service award on behalf of the State Government for his 50 years of dedication to fisheries in NSW.

FOR half-a-century Elsmore fish breeder Ray Mepham has been keeping the region’s waterways stocked with native species and today that service has been recognised with Northern Tablelands MP and Minister for Agriculture Adam Marshall presenting him with an award for outstanding service.

Ray, his wife Edna and their late son Kevin established the Native Fish Hatchery on their sheep property ‘Little Valley’ near Elsmore on the Macintyre River in 1970.

“Ray has made an exceptional contribution to the conservation of Murray Cod, the icon and apex predator of the Murray-Darling River System and is considered a pioneer of the NSW aquaculture industry,” Mr Marshall said.

“He pioneered the stocking of Murray Cod fingerlings back in 1970 and was the first person to artificially breed Murray Cod after research done by the late John Lake at the Inland Fisheries Research Station in the 1960s.

“Ray was stocking Murray Cod well before large-scale programs commenced at Government hatcheries, including the NSW Department of Primary Industries’ (DPI) hatchery at Narrandera, with commercial hatchery production of Murray Cod not starting until the early 1980s.

“He’s been a major player and long-time industry advocate and he is held with the utmost respect by his peers and community.

“Ray is the epitome of nature’s gentleman and a renowned river watcher and he’s a local legend in northern NSW.”

Mr Marshall said it was a pleasure to be able to visit Ray’s museum which provides a comprehensive history of the region’s inland fishing history.

“Ray’s property ‘Little Valley’ houses a small, informative museum, which has proven to be a popular and informative destination for tourists and local school children,” Mr Marshall said.

“It documents the efforts of DPI and stocking groups at Bingara, Emmaville, Tenterfield, Inverell, Glen Innes and Ashford, Murray Cod to re-established fish populations in the rivers, creeks and dams on the Northern Tablelands, making it one of the best fishing regions in the Murray-Darling river system.

“It is a real privileged to have been able to meet Ray and celebrate his important contribution to our region.”