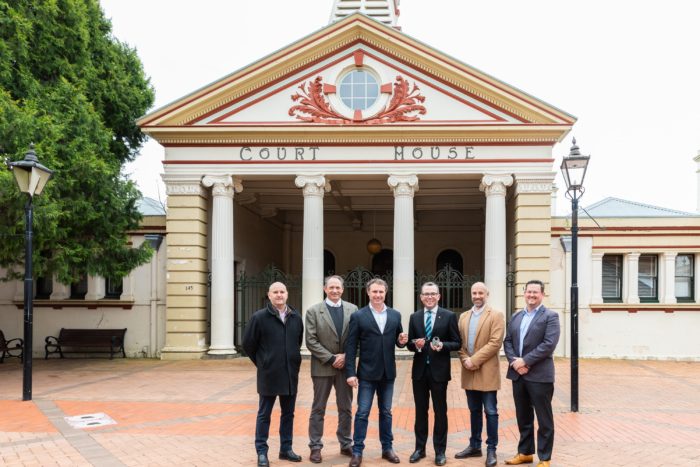 THE jury has delivered its verdict on the future of the oldest surviving public building in the region, the 162-year-old former Armidale Courthouse, with Northern Tablelands MP Adam Marshall joining with Armidale Regional Council Mayor Sam Coupland today to announce the site’s inclusion on the NSW State Heritage Register and its transfer to Armidale Regional Council ownership, for a nominal fee of just $1.

Mr Marshall said the heritage listing marked the end of a five-year campaign to have the historical importance one of the NSW’s earliest and most iconic regional courthouses recognised.

“Like an anxious plaintiff waiting for a judgement, it is with a huge sense of relief that this long running campaign, led by passionate locals, has come to such a positive conclusion,” Mr Marshall said.

“The listing, which is now in effect, encompasses the former Armidale Courthouse, built in 1860 and altered in 1870 and 1897 and the adjacent Sheriff’s Cottage, which was built in 1878.

“It also includes a collection of moveable heritage items, including intact furniture and fixtures located in the main courtroom.

“A Conservation Management Plan and a moveable heritage collection register has been prepared by Property NSW.

“The former Armidale Courthouse highlights the legacy of three successive NSW Colonial Architects – Alexander Dawson, James Barnet and Walter Liberty Vernon. They were all prominent and distinguished figures who left a significant mark on the built fabric and history of our State.”

Mr Marshall said the heritage listing had coincided with a council decision to officially purchase the courthouse from the State Government, at an agreed price of just $1.

“It is great news that this spectacular and iconic building will remain in community hands and be used as a community precinct that will reinvigorate the Beardy Street Mall,” he said.

“It’s easily one of our most recognisable buildings, right in the heart of the city, and to see it reinvigorated some 162 years after it was built will add a new strong to the bow of the Armidale CBD.

“It’s been effectively locked up since the new courthouse was constructed in 2013, so it’ll be great to see this beautiful old building used and cared for once again.

“I look forward to now working with council on securing funding to undertake the significant improvements needed bring the space up to modern health and safety standards.

“Whatever its final use I am pleased that the courthouse will one day be restored and again contributing to Armidale life.”

Property NSW’s Conservation Management Plan will guide Council’s conservation and development of this well-known complex into a vibrant facility.