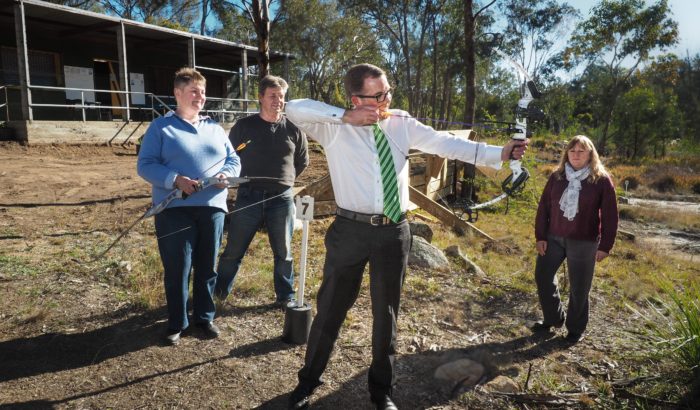 THE dedication of Uralla Bowmen archery club in carving a venue out of abandoned land has earned the club a $2,590 NSW Department of Sport and Recreation grant to help upgrade the club’s basic facilities.

Uralla Bowmen began from scratch two years ago on several hectares of vacant Crown land near Mount Yarrowyk. The block contained only a windowless abandoned concrete building that had become a site for illegal rave parties.

Announcing the funding today, Northern Tablelands MP Adam Marshall said the hard work of the club’s field archery enthusiasts had transformed this waste land into an attractive venue for a family-friendly sport.

The funds will be used to provide shelter on the shooting line, install a retaining wall and buy two portable toilets.

“This is a modest investment by government to leverage the hundreds of hours of work already invested by club members in transforming what was basically a rubbish dump into a wonderful family venue,” Mr Marshall said.

“It shows the power of community – in in this case a small one, focused on a particular sport – to build good things out of nothing.

“I have nothing but admiration for Uralla Bowmen, and small sporting groups like them, that have the dedication and enterprise to get off the couch and create places that bring people together and foster skill.

Mr Marshall added, “having tried archery under the supervision of the Bowmen, and having failed to hit the bull at point-blank range, I’m also in great admiration of their skill.”

Uralla Bowmen was founded by Stewart and Dianne Houghton, who wanted to revive their interest in field archery after moving to Uralla from Brisbane.

A years-long quest for a suitable venue kept coming up blank, until Mr Houghton saw a glimpse of a roof in bushland while driving along the road.

He investigated, and found a beautiful natural site, bisected by a creek, containing a rubbish-choked abandoned concrete building.

The club was able to negotiate a lease, and the work began to transform the site into a field archery course (think of golf, but with bows and arrows).

“These funds will help us to improve safety and access, and take the club to the next level,” Mr Houghton said.