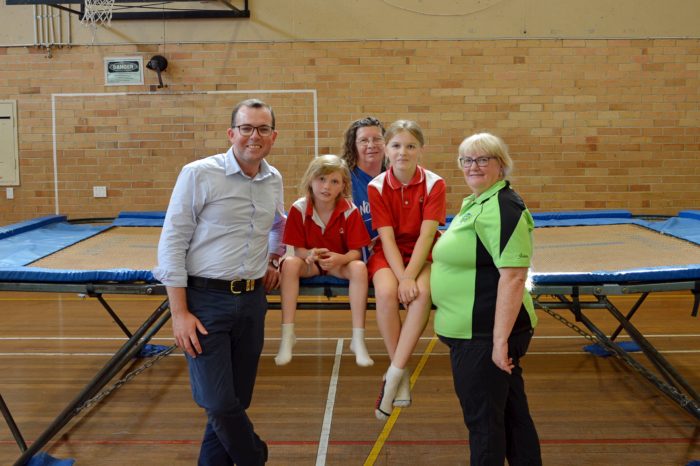 A FUNDING fling announced by Northern Tablelands MP Adam Marshall for the small Sapphire City Gymnastics Club in Inverell will give some talented young gymnasts more equipment so they can turn on some more athletic firepower in training.

“Until now, the small club has been having to make do with half-routine training runs because they’ve only had half the tumbling strip, and that’s obviously been a drawback for some talented kids,” Mr Marshall said.

“And the grant will also allow them to buy another crash mat to add to the single one they have now.

“It’s a great little win for a club that has kids who really do punch above their weight when it comes to skills and competition standard.”

“It really means we have a good lift in being able to go onto bigger and better things,” Ms Hankins said.

“We have half a tumbling mat, that’s about five metres long, but to do a full routine you need a full mat, about 10 metres, so this is a nice little addition; it’s awesome actually, good for the girls.

“It’s a small club, with the oldest athlete 12 and the youngest 7 years old and we had one girl get third at the state titles this year, and we’ve got an 11-year-old now who won a country championship two years ago, so we’re up there and doing stuff and getting better equipment that they can train on helps everyone.”

Mr Marshall said the club had been operating about six years and has six gymnasts who compete in Sydney and another 13 just about at the stage where they’re ready to take to the bright lights too.

“The club hires the hall at Macintyre High School and does so much with so little that it’s a pleasure to see them get a small step up in the gymnastics world,” Mr Marshall said.

“They’re looking to the future and bigger and brighter things. They do trampoline as well but next year Debbie will also start coaching them in rhythmic gymnastics, so that’s even more exciting for local sport.

“This grant program is helping small clubs like Sapphire City, and in this case, this is a real gem for them.”