FUNDING SOUGHT FOR NEXT STAGE OF REGIONAL AIRPORT UPGRADE 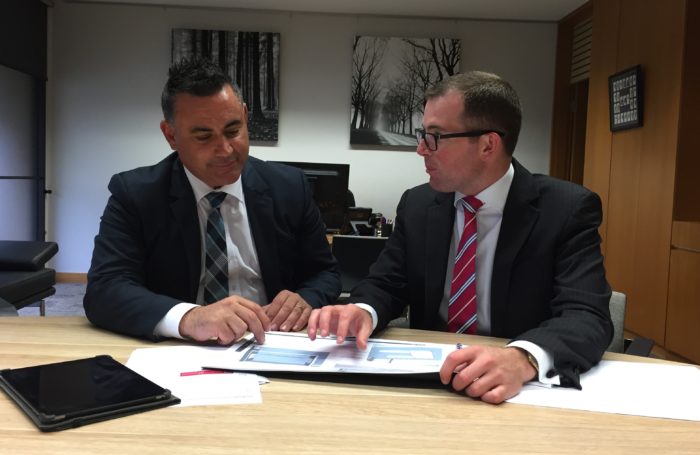 FUNDING for the expansion of the Armidale Regional Airport terminal was top of the agenda at a meeting between Northern Tablelands MP Adam Marshall and Regional Development Minister John Barilaro yesterday in State Parliament.

Mr Marshall is pressing the government for $6.3 million to allow Armidale Dumaresq Council to upgrade the existing terminal, doubling its size with capacity for separate check in facilities, security screening areas for passengers and baggage, meeting rooms and regional air carrier lounge in the future.

“The terminal expansion is a key component of the overall plan to enhance the airport’s facilities and infrastructure to build capacity for this coming growth and remove any potential congestion and time delays.”

“This will see the current three-bay parking apron extended to allow four aircraft, three of which could be the larger Dash 8 Q400s, to make use of the apron at the same time and remove existing restrictions,” Mr Marshall said.

“I’m now chasing another $6.3 million from the government to assist council with the next stage of works to expand and upgrade the passenger terminal.”

Mr Marshall said that council hopes the upgrades, combined with the nearby industrial development, will position the airport as a growing hub for passenger services and extend existing general aviation and aviation related business activity.

The state government has also committed a third of the cost ($1 million) for the new roundabout to be constructed on the New England High which will provide access to the airport, Saumarez Homestead and the industrial subdivisions on both sides of the highway.

“I received a very good hearing from the Minister. It helps that the Minister has toured the airport facilities previously and now he is very aware of expansion plans,” Mr Marshall said.

“It was a very good meting and the Minister has agreed to look favourably on the request and I expect to hear some news next month.

“In the meantime, I’ll continue to press the case for funding with the government.”