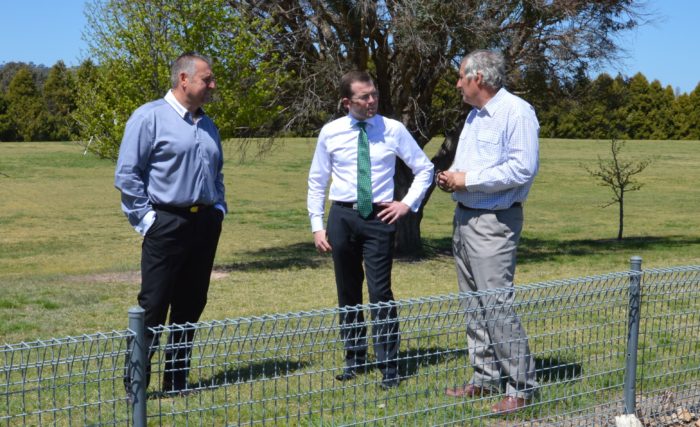 Member for Northern Tablelands Adam Marshall pictured with Uralla Shire Council Mayor Michael Pearce, left, and Director of Infrastructure and Regulation Robert Bell at the Uralla Sports Complex on the site where the new canteen facility will be built.

URALLA Shire Council’s plans to build a new canteen at the Uralla Sports Complex have moved into top gear after receiving news from Northern Tableland MP Adam Marshall of a $28,700 funding boost, meaning that the entire project would now be funded by the NSW State Government.

Mr Marshall said Uralla Shire Council had applied through the NSW Community Building Partnership for a $57,400 grant, the total cost of construction, but initially had only been successful in securing half the required amount.

“I’m very pleased to announce that I have managed to secure the remainder of the funding after money was returned to the overall pool after two other funded projects received funding from other programs,” Mr Marshall said.

“Council had planned to go ahead with the build and contribute the remaining $28,700 from its own funds, but that is no longer necessary.

“It’s a wonderful outcome for Uralla Shire Council and the community and it’s very pleasing to be able to offer this sort of financial assistance to a local council that does such a wonderful job maintaining its large portfolio of public assets.

“The sport complex is well-used and is very busy during the winter months with both the soccer and rugby league comps, so in the first instance, having a new canteen will be of great advantage to the players and their families and will also give the clubs a new and very welcome stream of income.”

Uralla Shire Council Mayor Michael Pearce said council was delighted to receive the extra funding and thanked Mr Marshall for his efforts on their behalf.

“This is an important project for the Uralla community and we certainly appreciate Mr Marshall going in to bat for us to secure the remainder of the funding,” Cr Pearce said.

“We have over 250 league and soccer players using the grounds through the winter and to be able to offer sustenance and even coffee will be a great benefit on those cold winter days.”