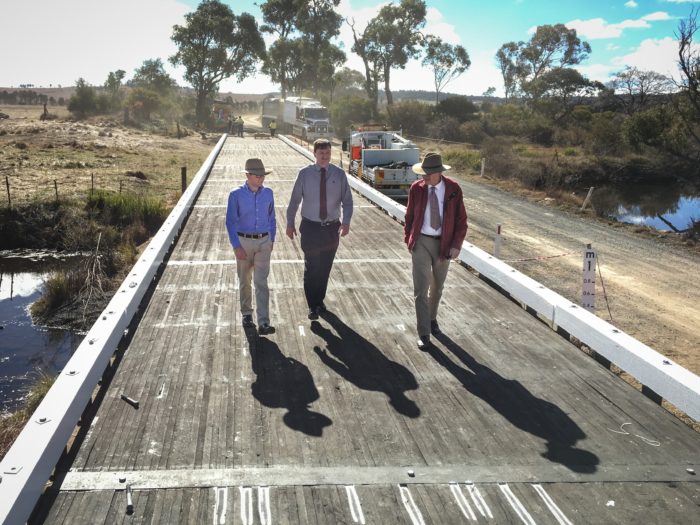 A LOCAL council has devised a process for replacing its timber bridges that should be of national interest, NSW Parliament was told last week.

In a speech in the Legislative Assembly, Northern Tablelands MP Adam Marshall outlined how Glen Innes Severn Council has developed an innovative use of timber to rebuild its rural bridges at a fraction of the cost of using concrete.

“I propose that this could be the case for the humble timber bridge, because of the example being set in my electorate by Glen Innes Severn Council.”

Teaming up with a Glen Innes fabricator, Weir Built, Council’s Director of Infrastructure Services Keith Appleby has begun using a locally-devised laminated timber bridge deck that has the same load rating and longevity as a concrete deck, and is modular for easy transport and installation.

Most importantly, the laminated decks mean that old timber bridges can be rebuilt for less than half the cost of pouring a new concrete bridge.

“The implications of this concept cannot be overstated,” said Mr Marshall, who was recently shown over Glen Innes Severn’s first project using the technology.

“For rural councils struggling with unsustainable bridge upgrade schedules, Keith and Jay Weir have developed a solution that may allow them to double their rate of replacement.

“That has big implications for council budgets, rural freight routes, and for everyday safety.”

For decades, councils have regarded timber bridges as a liability. Many have reached their use-by date – Glen Innes Severn alone has 42 bridges in need of replacement – or at best, requiring constant maintenance.

When timber bridges are replaced, it is almost invariably with a concrete structure.
But Glen Innes Severn Council has just replaced the Nine Mile Bridge near Dundee that services a handful of landholders for a cost of just $400,000 – which is $600,000 less than the $1 million it would have cost to build a concrete bridge.

And just as if it had been built with concrete, the bridge should not trouble Council for decades to come.
“Concrete has its place, but my message to all is that timber has not disappeared as a bridge-making material,” Mr Marshall said.

“It is still cheap, still easily worked, still renewable and now it can be put together in ways that make it as strong and long lasting as concrete.

“I congratulate Keith Appleby and Jay Weir on their innovation and on keeping local dollars in Glen Innes to support local businesses. Well done.”

I would like the House to consider for a moment the humble and often maligned wooden bridge.

Timber enabled our predecessors to build the foundations of our road transport system, opening up country New South Wales and establishing the thriving bush communities and inland cities that we all call home today. Bridges in that time could be built with a resource that was ready to hand, could be worked with simple technologies and, most importantly, was cheap.

Those timber bridges, once considered assets, are now regarded by most councils as liabilities. Many have reached their use-by date and all need ongoing maintenance at a great cost that councils can ill afford or complete replacement.

Like beards, vinyl records and corduroy pants, everything old eventually becomes new again. I propose that this could be the case for the humble timber bridge because of the example being set in my electorate by Glen Innes Severn Council.

Keith Appleby is an engineer on Glen Innes Severn Council who grew up in a sawmilling family who worked the forests near Inverell. Because he grew up with timber and knows its immense versatility, Keith does not look upon timber bridges with the same prejudice as most council engineers. When his love of timber was combined with an innovative local fabrication business, Weir Built Constructions in Glen Innes, some interesting new solutions for low-cost bridge-making emerged.

Glen Innes Severn Council had to replace an old low-lying timber bridge over Nine Mile Creek near the village of Dundee, which is 26 kilometres to the north of Glen Innes. The bridge was around 100 years old. It serviced only a handful of farming families and the estimated cost of a new concrete deck, which is traditional for bridge replacements today, was $1 million.

That bridge is about to be opened at a completion cost of only $400,000. The sale of the old timber from the original structure, which is estimated to be worth around $50,000 in revenue to the council, can be deducted from that figure.

The trick to building a new bridge at less than half the cost of a conventional modern structure is to use timber. To be precise, it is to use timber in a way that cuts construction cost by 60 per cent with no less of a load rating and no loss of longevity versus its more modern and favoured concrete cousin.

What Keith and Jay Weir of Weir Built Constructions have come up with is a laminated bridge deck. They are using partly local timber, partly plantation timber. To understand its construction, think of a stack of heavy six-metre long wooden planks stacked 4.5 metres high, turn it sideways, lay it on the ground and bore a series of holes through the deck. That is where the expertise comes in. Bolted together with some serious ironmongery and coated in tar for longevity, we have a modular piece of bridge decking as strong and long lasting as concrete.

When several of these six by 4.5 metre timber modules are laid on an old concrete superstructure, we have a cheap new bridge that will not trouble future councils for many decades and that should outlive its modern concrete cousins.

Glen Innes Severn Council is using this technology only where there is already a concrete superstructure under the bridge, but having 42 timber bridges on the council’s upgrade schedule means a lot of bridges can be replaced that might otherwise have had to be maintained at enormous cost.

I do not know about others, but as someone who has spent a long time in local government before entering this place I find this innovation exciting. It means that some bridge replacement schedules could effectively progress at twice the speed and at half the cost of using concrete.

New South Wales Roads and Maritime Services is looking closely at what is being done in Glen Innes and I urge all my fellow members from the regions, especially along the divide, to take this innovative thinking back to their local councils and to spread the word.

Concrete has its place, but my message to all is that timber has not disappeared as a bridge-making material. It is still cheap, still easily worked, still renewable and now it can be put together in ways that make it as strong and long lasting as concrete.

I congratulate Keith Appleby and Jay Weir on their innovation and on keeping local dollars in Glen Innes to support local businesses. Well done.