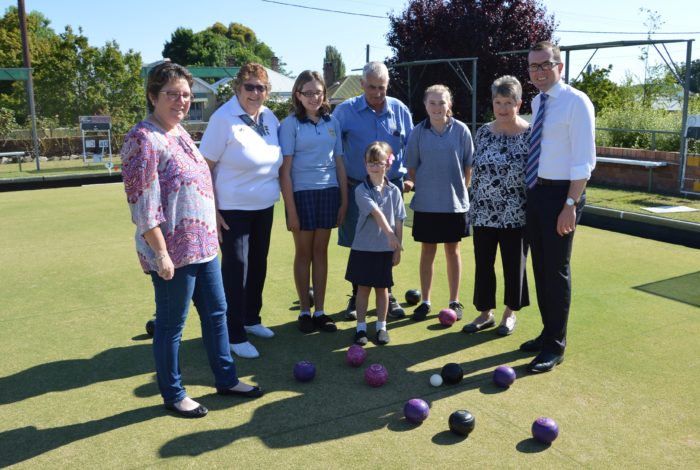 A NEW lawn mower mightn’t inspire too much emotion in too many women – but Northern Tablelands MP Adam Marshall was bowled over with the reaction from Glen Innes club secretary manager Catherine Donald recently.

“I’m over the moon; it’s just so exciting and yes, it’s marvelous news and I was so excited about it I nearly cried,” Ms Donald said this week when her local MP dropped in to drop an $8,900 funding gift for the bowling club.

“When you’ve got one 20-year-old one that’s falling to bits, it’s very exciting to find out you’re being given some funding to help you buy a brand new, you-beaut model.”

Mr Marshall said the bowling club had three mowers – all of them very, very old and the club had been repairing them for years – but the new mower would mean the end of regular repairs and using bits from the other two to keep one functioning.

“And Catherine says that what it will mean is that they can now maintain their greens to a high standard which will help entice more bowlers but also help them try to get a specialist greenkeeper back on staff because it’s been a job for volunteers for a while,” Mr Marshall said.

The club in Macquarie Street currently bowls on two greens with a third devoted to croquet.

Ms Donald said the club had a membership of 88 bowlers, 51 of them men and 37 women and there were also six junior bowlers.

Bowls are played nearly every day, both competition and social, but there’s also a twilight comp and the local high school students use in once a week for sport.

“And we are going to establish a junior club in the new year because we’ve got about a dozen who are interested so the new mower will help us do the greens quicker and better and it should encourage more community participation too,” she said.

Mr Marshall said the funding had been delivered via this year’s Community Building Partnership program and was one of about 15 for small community clubs and groups across the Northern Tablelands to help improve participation levels with upgraded or new facilities.