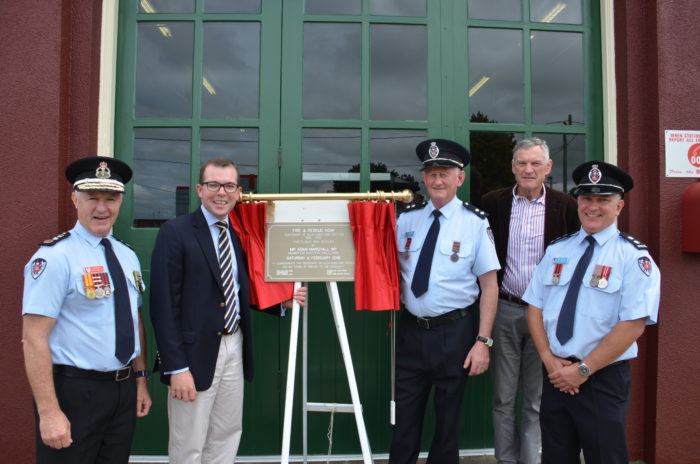 Mr Marshall said it was an honour to celebrate Glenn Innes Fire Station’s 100th anniversary and to acknowledge the courage and dedication of firefighters who had served there over the last century.

“For 100 years, Glen Innes firefighters have responded to all manner of emergencies from the Bourke Street fire station, putting their lives on the line to protect residents’ lives and property,” Mr Marshall said.

“Glen Innes firefighters play a crucial role in their community and Glen Innes Fire Station’s centenary is the perfect opportunity to thank them for their service.”

Commissioner Mullins said firefighters had been protecting Glen Innes and the surrounding communities since a volunteer brigade under Captain John Sully was formed in 1888.

“The Board of Fire Commissioners took control of the brigade in 1910 and built the station here on Bourke St in 1915 but it wasn’t until 1 February 1916 that the brigade moved in,” Commissioner Mullins said.

“Glen Innes firefighters have responded to all manner of emergencies from this station over the past 100 years, from protecting the community from bushfires and floods, to responding to major bush and building fires.

“A lot has changed in the fire service over the past 100 years. Today, the 18 firefighters stationed at Glen Innes have modern fire engines and the latest in equipment and technology to ensure the safety and protection of themselves and the local community.

“But the one thing that hasn’t changed is the courage and commitment shown by firefighters past and present.”